The Indus Valley civilization, one of the oldest in the world and dating back at least 5,000 years, spread over much of what is presently Pakistan. During the second millennium B.C., remnants of this culture fused with the migrating Indo-Aryan peoples. The area underwent successive invasions in subsequent centuries from the Persians, Greeks, Scythians, Arabs (who brought Islam), Afghans, and Turks. The Mughal Empire flourished in the 16th and 17th centuries; the British came to dominate the region in the 18th century. The separation in 1947 of British India into the Muslim state of Pakistan (with West and East sections) and largely Hindu India was never satisfactorily resolved, and India and Pakistan fought two wars - in 1947-48 and 1965 - over the disputed Kashmir territory. A third war between these countries in 1971 - in which India capitalized on Islamabad's marginalization of Bengalis in Pakistani politics - resulted in East Pakistan becoming the separate nation of Bangladesh. In response to Indian nuclear weapons testing, Pakistan conducted its own tests in 1998. The dispute over the state of Kashmir is ongoing, but discussions and confidence-building measures have led to decreased tensions since 2002. Mounting public dissatisfaction with President MUSHARRAF, coupled with the assassination of the prominent and popular political leader, Benazir BHUTTO, in late 2007, and MUSHARRAF's resignation in August 2008, led to the September presidential election of Asif ZARDARI, BHUTTO's widower. Pakistani government and military leaders are struggling to control Islamist militants, many of whom are located in the tribal areas adjacent to the border with Afghanistan. The November 2008 Mumbai attacks again inflamed Indo-Pakistan relations. The Pakistani Government is also faced with a deteriorating economy as foreign exchange reserves decline, the currency depreciates, and the current account deficit widens. (Source: World Factbook) 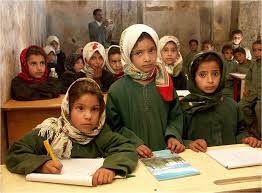 Comparison of data for men and women reveals significant disparity in educational attainment. By 1992, among people older than fifteen years of age, 22 percent of women were literate, compared with 49 percent of men. The comparatively slow rate of improvement for women is reflected in the fact that between 1980 and 1989, among women aged fifteen to twenty-four, 25 percent were literate. United Nations sources say that in 1990 for every 100 girls of primary school age there were only thirty in school; among girls of secondary school age, only thirteen out of 100 were in school; and among girls of the third level, grades nine and ten, only 1.5 out of 100 were in school. Slightly higher estimates by the National Education Council for 1990 stated that 2.5 percent of students--3 percent of men and 2 percent of women- -between the ages of seventeen and twenty-one were enrolled at the degree level. Among all people over twenty-five in 1992, women averaged a mere 0.7 year of schooling compared with an average of 2.9 years for men.

The discrepancy between rural and urban areas is even more marked. In 1981 only 7 percent of women in rural areas were literate, compared with 35 percent in urban areas. Among men, these rates were 27 and 57 percent, respectively. Pakistan's low female literacy rates are particularly confounding because these rates are analogous to those of some of the poorest countries in the world.

Pakistan has never had a systematic, nationally coordinated effort to improve female primary education, despite its poor standing. It was once assumed that the reasons behind low female school enrollments were cultural, but research conducted by the Ministry for Women's Development and a number of international donor agencies in the 1980s revealed that danger to a woman's honor was parents' most crucial concern. Indeed, reluctance to accept schooling for women turned to enthusiasm when parents in rural Punjab and rural Balochistan could be guaranteed their daughters' safety and, hence, their honor. Source: Pakistan: A Country Study.