THE MIDDLE EAST AND RELATED AREAS 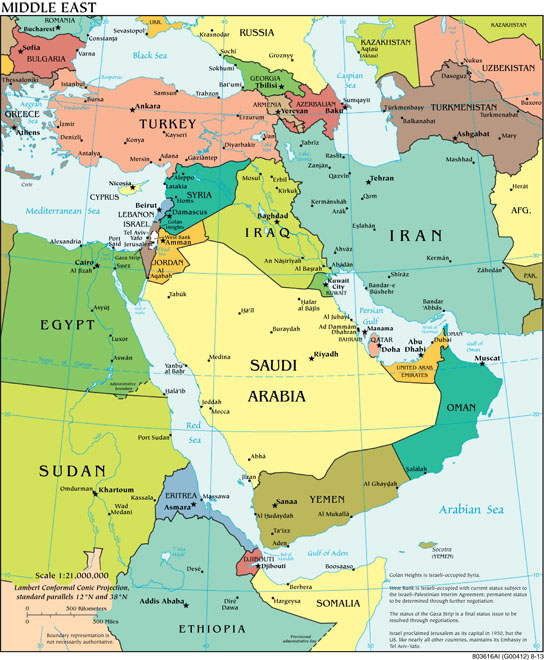 What is the Middle East?

Middle East, the lands around the southern and eastern shores of the Mediterranean Sea, extending from Morocco to the Arabian Peninsula and Iran and, by some definitions, sometimes beyond. The central part of this general area was formerly called the Near East, a name given to it by some of the first modern Western geographers and historians, who tended to divide what they called the Orient into three regions. Near East applied to the region nearest Europe, extending from the Mediterranean Sea to the Persian Gulf; Middle East, from the Persian Gulf to Southeast Asia; and Far East, those regions facing the Pacific Ocean.

The change in usage began to evolve prior to World War II and tended to be confirmed during that war, when the term Middle East was given to the British military command in Egypt. By the mid-20th century a common definition of the Middle East encompassed the states or territories of Turkey, Cyprus, Syria,Lebanon, Iraq, Iran, Israel, the West Bank, the Gaza Strip, Jordan, Egypt, Sudan, Libya, and the various states and territories of Arabia proper (Saudi Arabia, Kuwait, Yemen, Oman, Bahrain, Qatar, and the Trucial States, or Trucial Oman [now United Arab Emirates]). Subsequent events have tended, in loose usage, to enlarge the number of lands included in the definition. The three North African countries ofTunisia, Algeria, and Morocco are closely connected in sentiment and foreign policy with the Arab states. In addition, geographic factors often require statesmen and others to take account ofAfghanistan and Pakistan in connection with the affairs of the Middle East.