The regularity and richness of the annual Nile River flood, coupled with semi-isolation provided by deserts to the east and west, allowed for the development of one of the world's great civilizations. A unified kingdom arose circa 3200 B.C., and a series of dynasties ruled in Egypt for the next three millennia. The last native dynasty fell to the Persians in 341 B.C., who in turn were replaced by the Greeks, Romans, and Byzantines. It was the Arabs who introduced Islam and the Arabic language in the 7th century and who ruled for the next six centuries. A local military caste, the Mamluks took control about 1250 and continued to govern after the conquest of Egypt by the Ottoman Turks in 1517. Following the completion of the Suez Canal in 1869, Egypt became an important world transportation hub, but also fell heavily into debt. Ostensibly to protect its investments, Britain seized control of Egypt's government in 1882, but nominal allegiance to the Ottoman Empire continued until 1914. Partially independent from the UK in 1922, Egypt acquired full sovereignty with the overthrow of the British-backed monarchy in 1952. The completion of the Aswan High Dam in 1971 and the resultant Lake Nasser have altered the time-honored place of the Nile River in the agriculture and ecology of Egypt. A rapidly growing population (the largest in the Arab world), limited arable land, and dependence on the Nile all continue to overtax resources and stress society. The government has struggled to meet the demands of Egypt's growing population through economic reform and massive investment in communications and physical infrastructure. Source: World Factbook

Egypt: Pyramid Building in the Old and Middle Kingdoms

With the Third Dynasty, Egypt entered into the five centuries of high culture known as the Pyramid Age. The age is associated with Chancellor Imhotep, the adviser, administrator, and architect of Pharaoh Djoser. He built the pharaoh's funerary complex, including his tomb, the Step Pyramid, at Saqqarah. Imhotep is famed as the inventor of building in dressed stone. His architectural genius lay in his use of durable, fine-quality limestone to imitate the brick, wood, and reed structures that have since disappeared.

The first true pyramid was built by Snoferu, the first king of the Fourth Dynasty. His son and successor, Kheops. 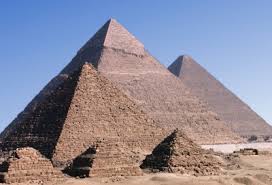 built the Great Pyramid at Giza (Al Jizah); this, with its two companions on the same site, was considered one of the wonders of the ancient world. It contained well over 2 million blocks of limestone, some weighing fifteen tons apiece. The casing stones

of the Great Pyramid were stripped off to build medieval Cairo (Al Qahirah).

The building and of funerary monuments represented the single largest industry through the Old Kingdom and, after a break, the Middle Kingdom as well. The channeling of so much of the country's resources into building and equipping funerary monuments may seem unproductive by modern standards, but pyramid building seems to have been essential for the growth of pharaonic civilization.

As Egyptologists have pointed out, in ancient societies innovations in technology arose not so much from deliberate research as from the consequences of developing lavish court projects. Equally important, the continued consumption of so great a quantity of wealth and of the products of artisanship sustained the machinery that produced them by creating fresh demand as reign succeeded reign.

The pyramids of the pharaohs, the tombs of the elite, and the burial practices of the poorer classes are related to ancient Egyptian religious beliefs, particularly belief in the afterlife. The Egyptian belief that life would continue after death in a form similar to that experienced on earth was an important element in the development of art and architecture that was not present in other cultures. Thus, in Egypt, a dwelling place was provided for the dead in the form of a pyramid or a rock tomb. Life was magically recreated in pictures on the walls of the tombs, and a substitute in stone was provided for the perishable body of the deceased. Source: Egypt: A Country Study.