Greece achieved independence from the Ottoman Empire in 1829. During the second half of the 19th century and the first half of the 20th century, it gradually added neighboring islands and territories, most with Greek-speaking populations. In World War II, Greece was first invaded by Italy (1940) and subsequently occupied by Germany (1941-44); fighting endured in a protracted civil war between supporters of the king and Communist rebels. Following the latter's defeat in 1949, Greece joined NATO in 1952. In 1967, a group of military officers seized power, establishing a military dictatorship that suspended many political liberties and forced the king to flee the country. In 1974, democratic elections and a referendum created a parliamentary republic and abolished the monarchy. In 1981, Greece joined the EC (now the EU); it became the 12th member of the European Economic and Monetary Union in 2001. (World Factbook)

The Rise of Athens and Sparta 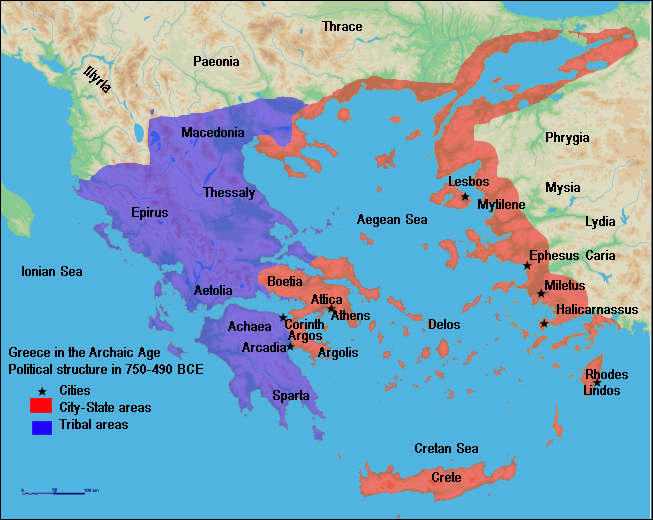 The concept of the polis (city-state) began to evolve with the development of aristocratic clans to replace chiefdoms. Clan rivalries yielded single powerful figures who were termed tyrants because they achieved domination in outright power struggles within the aristocratic group and among clan centers. Because they often were marginal clan members, the success of the tyrants created a new criterion for power: ability rather than birth. This change was a crucial element in the development of the polis, which came to be a politically unified community covering an average of 200 square kilometers and based on a small urban center. When the tyrants were overthrown after one to three generations, the institutionalized structure they created remained and became an important legacy to the modern world.

In the eighth century and early seventh century B.C., Sparta began to develop as a militant polis with a rigid social structure and a government that included an assembly representing all citizens. Meanwhile, Athens became the largest polis, combining several regions of the peninsula of Attica. Under the leadership of the aristocrat Solon, Athens developed a social system in which power was based on wealth rather than aristocratic birth. Citizens of various wealth categories were allotted different positions of power. Thus, in different ways Sparta and Athens built states that included wider sectors of society in their political activity than had any previous society, and the basis of democracy was laid. Source: Greece: A Country Study