Sherman’s March through the Carolinas

On January 30, 1865, General Sherman began his march through the Carolinas, cutting a wide swath 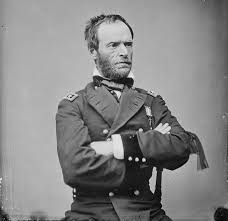 from Savannah to Bentonville, North Carolina. Along the way, the Union forces met light resistance. They were slightly delayed by fighting at Rivers Bridge on February 2-3. However, little else stopped the Union soldiers as they pushed forward a staggering ten to twelve miles a day, reaching the outskirts of Columbia on February 15th. Two days later, Columbia fell with little resistance. That night, liquor and cotton ignited one of the most debated fires of the War. In the fire’s wake, approximately 400 structures were destroyed, including private businesses, homes, churches, and government buildings. Source: Sherman’s March through the Carolinas (South Carolina Confederate Relic Room and Military Museum)