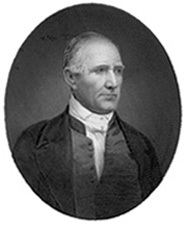 Sam Houston had already served in the U.S. House of Representatives and as governor of Tennessee when he moved to Texas in 1832. At the time he arrived, Texas was part of Mexico and the site of rising tensions and violent disturbances between Mexican authorities and Anglo settlers from the United States. Voicing his support for a separate state of Texas, Houston emerged as a leader among the settlers. In 1835, he was chosen commander in chief of the Texas army.

The Alamo was an 18th century Franciscan Mission in San Antonio, Texas, which was the location of an important battle for Texans fighting for independence from Mexico. In 1836, a small group of Texans was defeated by Mexican General Santa Anna.

When Houston received word of the defeat at the Alamo, he was inspired to begin a month-long retreat to regroup and replenish the Texas army's strength. Remembering how badly the Texans had been defeated at the Alamo, on April 21, 1836, Houston's army won a quick battle against the Mexican forces at San Jacinto and gained independence for Texas. Soon after, Houston was elected president of the Republic of Texas. He continued to serve as senator and governor after Texas became part of the United States in 1845.

Sam Houston died in 1863 in Huntsville, Texas, where a 67-foot-tall memorial statue of him now stands. After a lifetime of service to his country, the event for which he is most well known is his role in the independence of Texas. (Library of Congress, Sam Houston and the Battle for Texas Independence)