The Great Salt Lake is both the largest body of water between the Great Lakes and the Pacific Ocean and the largest salt lake in the western hemisphere. The Great Salt Lake is the major remnant of Lake Bonneville, a large freshwater lake of the Pleistocene era (75,000-7,250 B.C.) that occupied much of western Utah. The lake occupies one of the basins of the Great Basin, and is located at the western margin of the Wasatch Mountains of the Rocky Mountain Range.

The lake receives water from numerous perennial and intermittent streams originating in the surrounding mountains, the most important of which are the Bear, Weber, and Jordan rivers. No streams empty from the lake, and its high salinity is caused by the accumulation of minerals with no removal and the accompanying water evaporation. The lake occupies a broad level valley that has been created as deposits eroded from the surrounding mountains have filled the valley with sediments thousands of feet deep. The level nature of the valley is responsible for wide variations in the surface area of the lake, as a rise of only a few feet during wetter years can increase the surface area dramatically. In 1962 the lake elevation was 4,192 feet above sea level, giving it a surface area of 969 square miles (620,400 acres). In the early 1980s the lake reached an elevation of 4,212 feet above sea level, giving it a surface area of 2,300 square mile (1,472,000 acres). Source: Utah History Encyclopedia 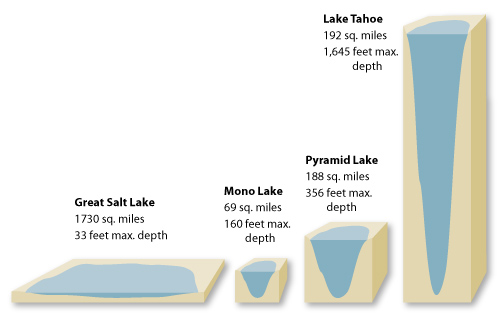