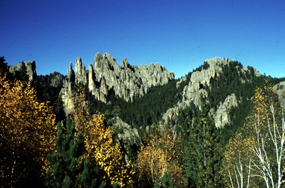 The Black Hills is a hilly region of pine forests, caves, lakes, canyons, and prairies that, from a distance, looks black. American Indians such as the Lakota considered the Black Hills to be a sacred area and hunting ground. By the late 19th century, however, the U.S. government drove the Indians out after white miners discovered gold in the hills.

Today, large parts of the Black Hills are park areas that tourists enjoy. They are also home to various wildlife, including bison, elk, coyotes, and prairie dogs. This is a special refuge for bison in particular because white men slaughtered so many in the 19th century that they almost became extinct at the beginning of the 20th century. Since then efforts have been made to protect them. Now bison herds have increased to the hundreds of thousands. Source: America's Story, Library of Congress