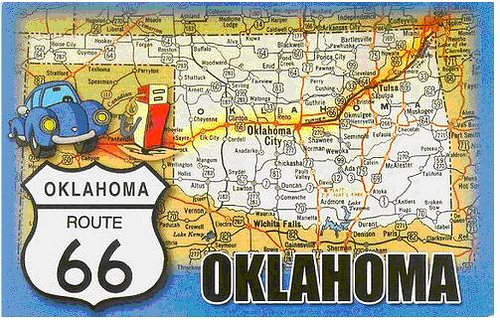 U.S. Highway 66 in Oklahoma occupies a very special place along the great arc of the Mother Road. Here the densely populated and nuanced terrain of the Midwest meets the western road’s wide open plains country.

At the creation of Route 66 in 1926, Oklahoma was not yet 20 years into statehood and was still developing a modern infrastructure, which the condition of its transportation and communication network at the time illustrates. As late as 1926, Oklahoma had more railroad mileage, the transport choice of the 19th century, than road miles.  On the eve of the Mother Road, less than 12% of the State’s roads had hard paved surfaces. As a result, the first generation of Route 66 roadbed in Oklahoma was a patchwork of disparate and often primitive roads.

This situation soon improved as the State, with Federal support, replaced Oklahoma’s various private highway associations as custodians of the roadway. This shift demonstrated a new level of State and Federal partnership in organizing human and material resources. From its very beginning, Route 66 in Oklahoma was a work in progress, constantly undergoing rerouting, widening, straightening, and resurfacing. The straightening and realigning of Oklahoma Route 66 shortened it by 47 miles between 1926 and 1951.

The postwar boom in tourism and transport catapulted Route 66 into its Golden Age but also nudged it closer to extinction, as Oklahoma opted to replace the eventually overburdened highway with a new generation of multi-lane, limited access thoroughfares.   By 1957, the Turner Turnpike and Will Rogers Turnpike connected Oklahoma City to Joplin, Missouri, and after 1970, Interstate 40 spanned the entire western half of the State.  These super highways relegated Route 66 to servicing local traffic. Source:  Route 66, Road Segments,  Oklahoma, National Park Service.