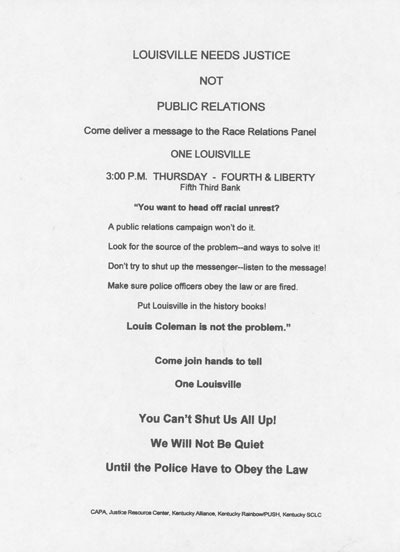 Coalition building remains an important part of the work of the Kentucky Alliance Against Racist and Political Repression. This undated flyer is an example of their coalition work with organizations like the Justice Resource Center and SCLC to bring about social justice in Louisville.

Come deliver a message to the Race Relations Panel

"You want to head off racial unrest?
A public relations campaign won't do it.
Look for the source of the problem--and ways to solve it!
Don't try to shut up the messenger -- listen to the message!
Make sure police officers obey the law or are fired.
Put Louisville in the history books!
Louis Coleman is not the problem."

You Can't Shut Us All Up!
We Will Not Be Quiet
Until the Police Have to Obey the Law