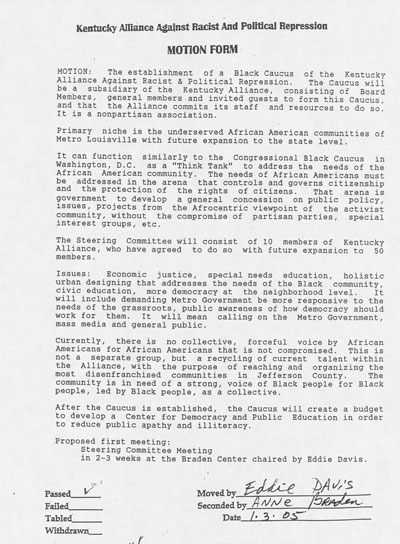 The Kentucky Alliance Against Racist and Political Repression has always had multi-racial membership-with a focus on people of color leading organizing efforts.  In early 2005, the organization’s membership approved a motion that created a Black Caucus to highlight concerns and issues particular to the African American Community.

Eddie Davis is the chair of the Alliance’s Black Caucus. Listen to his oral history interview for information on the caucus’ 2011 concerns.

Primary niche is the underserved African American communities of Metro Louisville with future expansion to the state level.

It can function similarly to the Congressional Black Caucus in Washington, D.C. as a "Think Tank" to address the needs of the African American community. The needs of African Americans must be addressed in the arena that controls and governs citizenship and the protection of the rights of citizens. That arena is government to develp a general concession on public policy, issues, projects from the Afrocentric viewpoint of the activist community, without the compromise of partisan parties, special interest groups, etc.

The Steering Committee will consist of 10 members of Kentucky Alliance, who have agreed to do so with future expansion to 50 members.

Issues: Economic justice, special needs education, holistic urban designing that addresses the needs of the Black community, civic education, more democracy at the neighborhood level. It will include demanding Metro Government be more responsive to the needs of the grassroots, public awareness of how democracy should work for them. It will mean calling on the Metro Government, mass media and general public.

Currently, there is no collective, forceful voice by African Americans for African Americans that is not compromised. This is not a separate group, but a recycling of current talent within the Alliance, with the purpose of reaching and organizing the community is in need of a strong, voice of Black people for Black people, as a collective.

After the Caucus is established, the Caucus will create a budget to develop a Center for Democracy and Public Education in order to reduce public apathy and illiteracy.