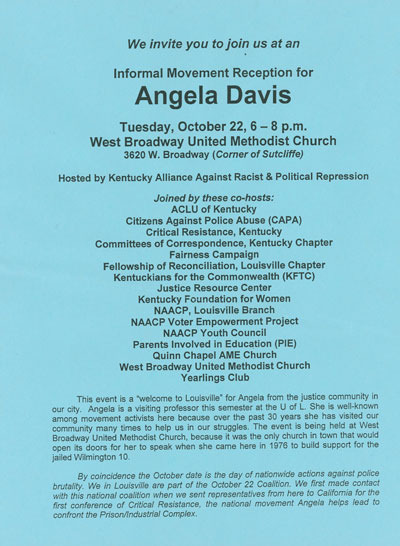 Activist and scholar Angela Davis was one of the founding members of the National Alliance Against Racist and Political Repression. The Kentucky Alliance Against Racist and Political Repression was a regional chapter, but is now a stand-alone organization. Davis was a scholar in residence at the University of Louisville in the fall of 2002. She taught courses on campus, held public lectures and was welcomed by the Louisville social justice community. This flyer is for a reception in her honor.

We invite you to join us at an Informal Movement Reception for Angela Davis.

This event is a "welcome to Louisville" for Angela from the justice community in our city. Angela is a visiting professor this semester at the U of L. She is well-known among movement activists here because over the past 30 years she has visited our community many times to help us in our struggles. The event is being held at West Broadway United Methodist Church, because it was the only church in town that would open its doors for her to speak when she came here in 1976 to build support for the jailed Wilmington 10.

By coincidence the October date is the day of nationwide actions against police brutality. We in Louisville are part of the October 22 Coalition. We first made contact with this national coalition when we sent representatives from here to California for the first conference of Critical Resistance, the national movement Angela helps lead to confront the Prison/Industrial Complex.