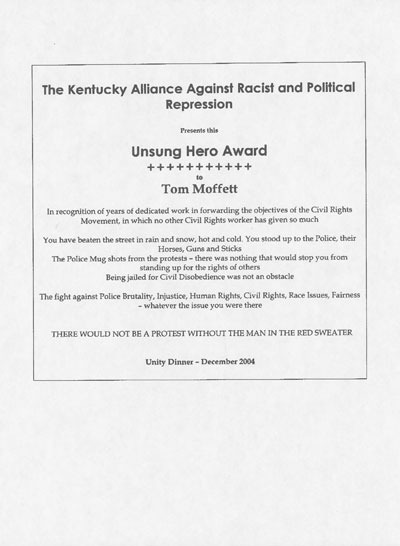 The Kentucky Alliance hands out awards to local activists each year during its Unity Dinner. In December 2004 the group recognized longtime member Tom Moffett as an “Unsung Hero” of the local movement.

An oral history interview with Tom Moffett is included in this collection.

The Kentucky Alliance Against Racial and Political Repression presents this Unsung Hero Award to Tom Moffett in recognition of years of dedicated work in forwarding the objectives of the Civil Rights Movement, in which no other Civil Rights worker has given so much.

You have beaten the street in rain and snow, hot and cold. You stood up to the Police, their Horses, Guns and Sticks, The Police Mug shots from the protests - there was nothing that would stop you from standing up for the rights of others; Being jailed for Civil Disobedience was not an obstacle.

The fights against Police Brutality, Injustice, Human Rights, Civil Rights, Race Issues, Fairness - whatever the issue you were there.

There would not be a protest without the man in the red sweater.