In 1973 Black Panther and Communist Party member Angela Davis mobilized activist friends Ben Chavis, Charlene Mitchell and Carl Braden to come together to form a nationwide organizing effort to free activists of color from jail. The result of their efforts was the formation of the National Alliance Against Racist and Political Repression (NAARPR). Soon after, one of the first regional chapters of the organization started in Louisville, Kentucky—the Kentucky Alliance Against Racist and Political Repression. The group, now a stand-alone organization, has been at the center of anti-racist crusades in Louisville, regionally and nationally centered on issues of combating police abuse and brutality, fighting for economic justice for the city’s poor and working to educate the broader public about the various effects of institutionalized racism.

The leadership of the Kentucky Alliance wanted relationships and interactions within their organization to mirror their vision for interracial relationships in our broader society. To that end, a core value was quickly established at the organization’s outset—African Americans and whites would work together, sharing power. White members are held accountable to, take leadership from, and are comfortable with, people of color taking the lead in organizing.

Like other small, grassroots organizations the Kentucky Alliance has many successes to point to as well as its fair share of stinging defeats from which to recover. This oral history exhibit explores the history of the Kentucky Alliance through the voices of 13 current and past members of the organization. Hear their stories about how they became involved with the Alliance. Listen for detailed information about the organization’s periods of great challenge, and hopes for the organization’s future. Click on the photographs and documents throughout the exhibit to learn more about this group that works to bring people together to take visible action in support of justice and fairness.

Fosl, Cate. Subversive Southerner: Anne Braden and the Struggle for Racial Justice in the Cold War South. Lexington: The University Press of Kentucky, 2006. 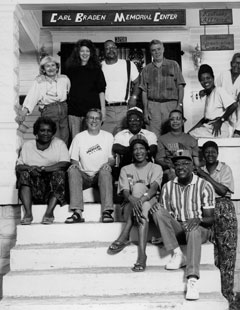 Members of the KAARPR on the steps of the Carl Braden Memorial Center, late 1980's. 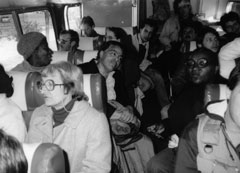 Members of the KAARPR on a bus headed to a Central America demonstartion in the 1980's. 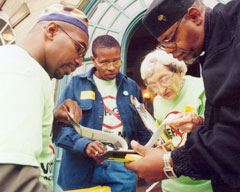 Members of the KAARPR canvass a Louisville neighborhood during the campaign against the merger of Louisville and Jefferson County in late 2000.