Kentucky’s statutory law had been revised a number of times since it was first codified by C. A. Squire Turner and S.S. Nicholas and adopted in 1852. The legislators of 1936 knew that the world had changed quite a bit since the last revision in 1894. They created a statutes revision committee charged with thoroughly revising and reorganizing Kentucky’s laws.The committee devised basic principles of the process, set up an office, and hired an experienced director, Robert K. Cullen, to oversee the process. The legislature in 1938 amended the law to let the revisers rewrite the laws in clear, plain language, with a minimum of duplicate terms. To deal with ancient, useless legal deadwood, in 1940 the legislature adopted a statute repealing over a thousand statutes. The final KRS was adopted in 1942.

These acts are important legislative history, as is the official KRS of 1942, which contains a preface detailing all of the editorial decisions of the revisers and the Report of the Statutes Revision Committee presented to the 1942 legislature. However, clearly the most valuable tool for researchers is the 1944 Notes and Annotations to the Kentucky Revised Statutes, which contains “the complete legislative history from the time of the last complete revision in 1873” and the “full Reviser’s Notes explaining all changes of language and omissions made in the process of revising the statutes.”

Print editions of the pre-KRS statutory codes (1792-1941) and superseded volumes of the KRS are all available in the UofL attic.

HeinOnline's State Statutes: A Historical Archive provides access to most of the superseded statutory codes of Kentucky.

Soon after the Kentucky Revised Statutes were enacted, the Kentucky Court of Appeals (then the high court) upheld the constitutional validity of the KRS in Fidelity Columbia Trust Co. v. Meek, 294 Ky. 122 (Ky. Ct. App. 1943) and offered guidance as to the general construction of its provisions.

Legislative Documents of the Revision

The Kentucky Revised Statutes were part of a long legislative process. These are the four most important laws involved:

The Kentucky Acts can be found at the UofL Law Library and in the HeinOnline State Session Laws (HO-SSL) database under "Kentucky."

The key print products of the statute revision process were:

All three can be found at the attic of the UofL Law Library or in HeinOnline's State Statutes: A Historical Archive. Click here to go straight to the Kentucky material). 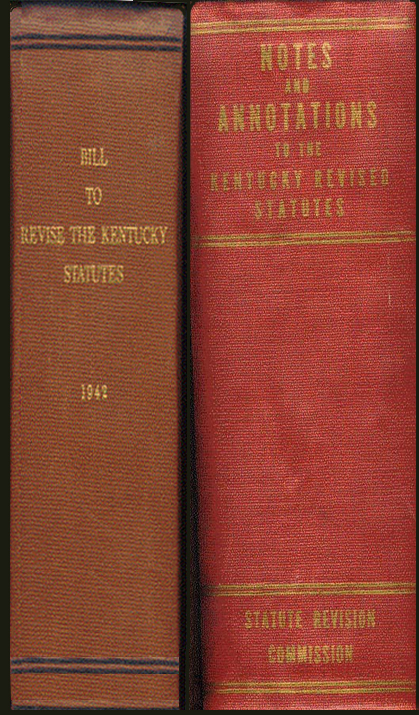 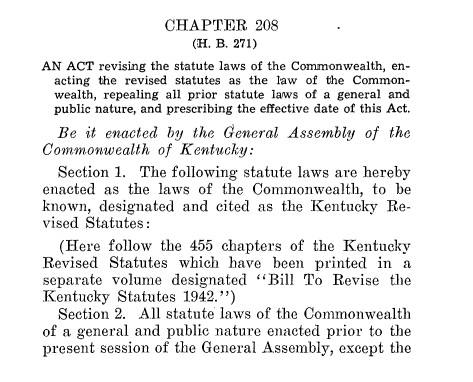