Skip to Main Content
It looks like you're using Internet Explorer 11 or older. This website works best with modern browsers such as the latest versions of Chrome, Firefox, Safari, and Edge. If you continue with this browser, you may see unexpected results.
Archives & Special Collections (ASC)

Simmons University originated in 1873, when the General Association of Colored Baptists in Kentucky opened the Kentucky Normal and Theological Institute in Louisville. In 1884 the name changed to State University. In 1919 the name changed again, this time to Simmons University. During the late 19th and early 20th centuries Simmons offered a variety of manual and academic programs. In 1930 it reorganized as Simmons Bible College limiting curriculum to religious training. This archive includes school catalogs, yearbooks, promotional literature, scrapbooks, and photographs; together with minutes and other publications of the school's sponsoring agency, General Association of Kentucky Baptists, formerly the General Association of Colored Baptists in Kentucky. Also present is material on Central Law School and Louisville National Medical College, affiliates of the college, and on the history of the General Association and black Baptists in Kentucky, African American elementary, secondary, higher, and professional education in Kentucky, African Americans in Louisville, Kentucky's Day Law (1904), and Louisville Municipal College. Represented in the papers are William J. Simmons (1849-1890), and Charles Henry Parrish Sr., president from 1918 to 1931. Also included is historical material from Simmons University including two scrapbooks, a 1926-1927 yearbook, and one 1928 unsigned diploma. 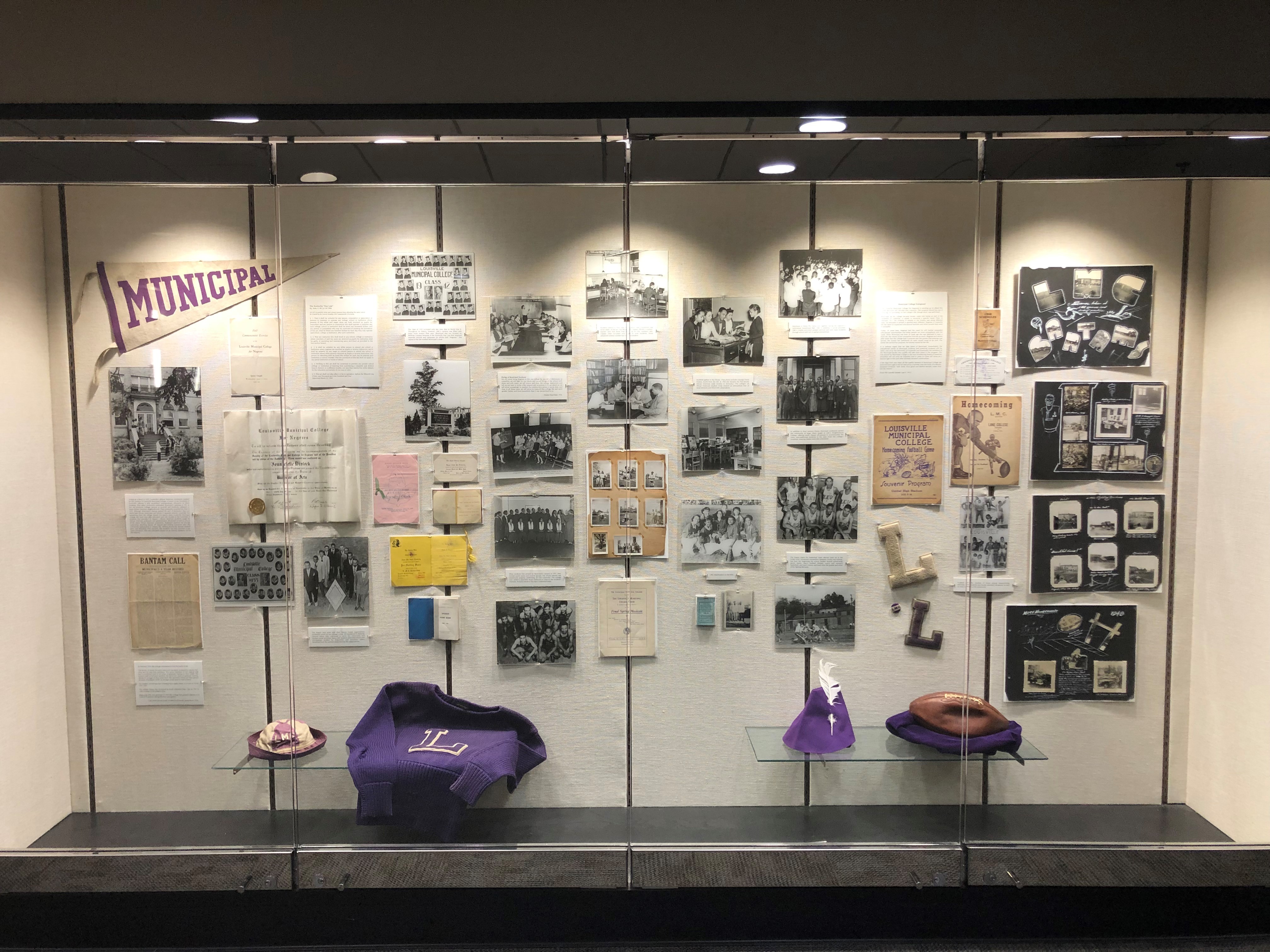 On February 9, 1931, 83 students enrolled in the new Louisville Municipal College for Negroes (LMC). Functioning as "a separate institution under the administration of the board of trustees of the University of Louisville," it was the only full-fledged black liberal arts college in Kentucky and the only one in the nation supported by city funds. The university complied with the "separate but equal" legal doctrine of segregation, often paying only lip service, at least, to the spirit of the "equal" portion. School officials and black community leaders were determined that the LMC offer a sound four-year undergraduate pre-professional liberal arts program, and in 1936 LMC was accorded full accreditation by the Southern Association of Colleges and Secondary Schools. For two decades LMC would remain a segregated undergraduate division of the U of L. Before it closed in 1951, the institution had enrolled 2,649 students, 512 of whom graduated with degrees in a broad array of academic disciplines.

This collection is made up of memorabilia of Louisville Municipal College (LMC) collected by Linda L. Wilson. There are scrapbooks, yearbooks, football programs, issues of the student newspaper, photographs, a sweater, a jacket, a beanie, banners, and obituaries for deceased alumni. This collection includes a series of oral history interviews conducted by Linda Wilson; these interviews have been transcribed. There are also some items from an exhibit on African American soldiers. 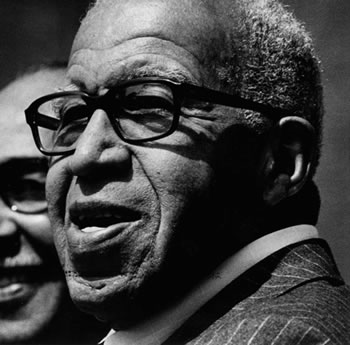 Charles Henry Parrish, Jr. (1899-1989), the son of Simmons College president Charles Henry Parrish Sr., was an educator and sociologist, who was also known for his participation in the civil rights movement and community work. He taught for twenty years at the Louisville Municipal College and was the only LMC faculty member retained when LMC was absorbed into UofL. Parrish became the first African American faculty member to work at UofL. This collection is a rich resource for African American studies and contains correspondence, printed material, literary productions, financial documents, and maps. Included are personal and professional correspondence from 1950 to 1970; manuscripts and published articles from 1954 to 1967, including notes and drafts; personal records from 1928 to 1965; records and working files of local and national agencies of which he was a member; Charles Henry Parrish Sr. and Mary V. Cook Parrish materials from 1904 to 1945; Francis Parrish materials from 1949 to 1967; Ursula Parrish West materials from 1956 to 1965; and family photographs. Also included are class notes taken by Parrish at the University of Chicago in the 1930s, and miscellaneous material.

The Black Student Union was organized at U of L in the 1960s and began pressuring the university to expand course offerings in black history, literature, and culture. The university did not respond to all of the demands of the union and there was the occupation of a university building in May 1969. Records of the Union contain newsletters and clippings, recruiting proposal, fact sheets and press releases concerning the BSU's effort to persuade the university to expand academic course offerings; financial aid and tutorial programs; the confrontation which resulted in the occupation of a university building followed by the arrest of some of the students, expulsion and reinstatement of some. 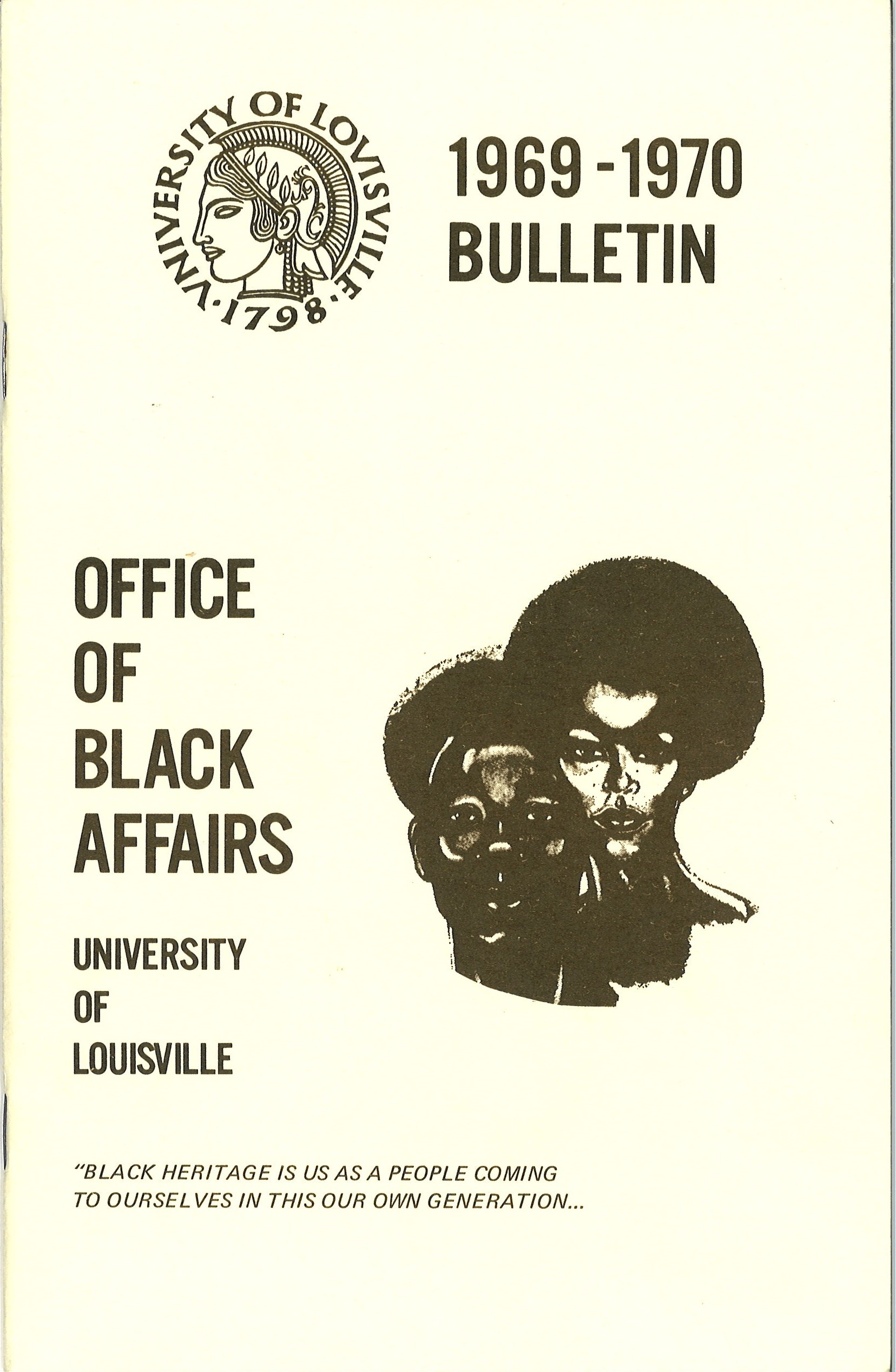 In 1968, the Black Student Union (BSU) which was organized the previous year, protested the university’s lack of attention to the needs and concerns of student of color. Negotiations between the BSU and the university administration lasted for a year with little progress. In April 1969, the BSU submitted a detailed plan that called for greater efforts to recruit faculty and students of color, increase financial aid support for Black students, and expand course offerings in Black history and literature. In response, the University established the Office of Black Affairs (OBA) in May with Hanford D. Stafford as interim Coordinator. Stafford was charged with implementing and directing the Black Studies program, which included services such as student recruiting, tutoring, and counseling. According to a c. 1974 brochure, the OBA “assists U of L in developing new approaches toward the enhancement of Black students’ life styles and facilitating the university effort in community services.” It lists the following as specific OBA activities: "1. Recruiting and retaining Black undergraduates 2. Delivering tutorial and counseling services 3. Sponsoring social and cultural activities 4. Improving the university’s relationship to the Black community 5. Coordinating student development activities; e.g. Black student newspaper, Black Diamond Chorus." In 1976, OBA was renamed the Office of Minority Affairs.

Some materials in these records contain sensitive or confidential information that is protected under federal and/or state privacy laws. Because these records must be reviewed by Archives and Special Collection staff prior to access, research requests must be made 48 hours in advance by contacting archives@louisville.edu.