Just because you properly name your files and have stored them on your hard drive, a cloud drive, and a USB does NOT mean that you have preserved that data for use and accessibility in the future.

Hardware storage devices can become obsolete as technology evolves. Remember CD's, floppy disks, and VHS tapes? USB's are great right now, but what will replace them? Software storage options can also pose a problem, especially if you are using proprietary software that can only be used in a particular lab or setting.

Saving your data using current, open file formats allows your data to be accessed over time and platforms.

Preservation metadata is a specific type of metadata that describes a digital item in terms of both context and structure. Its goal is to maintain a digital objects viability while ensuring continued access through providing contextual information as well as details on usage and rights. Preservation metadata is an essential part of the data lifecycle; helping to document a digital objects authenticity while maintaining usability across formats.

One of the main ways that preservation metadata differs from metadata is that it is external metadata that stores technical details on the format, structure and use, and history of all actions performed on a resource. These could include changes and decisions regarding digitization, migration to other formats, custody history, rights and responsibilities information, and physical condition of a resource.

Preservation metadata is access-centered and should accomplish four goals

When you are collecting your data, you may need to use specific hardware or software that is proprietary or specific to your project. However, you should plan ahead as to how you will transform that data into accessible formats for long-term storage and preservation.

Some things to consider include:

The PREMIS (PREservation Metadata:  Implementation Strategies) Standard is the international standard for metadata to support the preservation of digital objects and ensure their long-term usability. The PREMIS Data Dictionary is organized around a data model consisting of five entities associated with the digital preservation process: 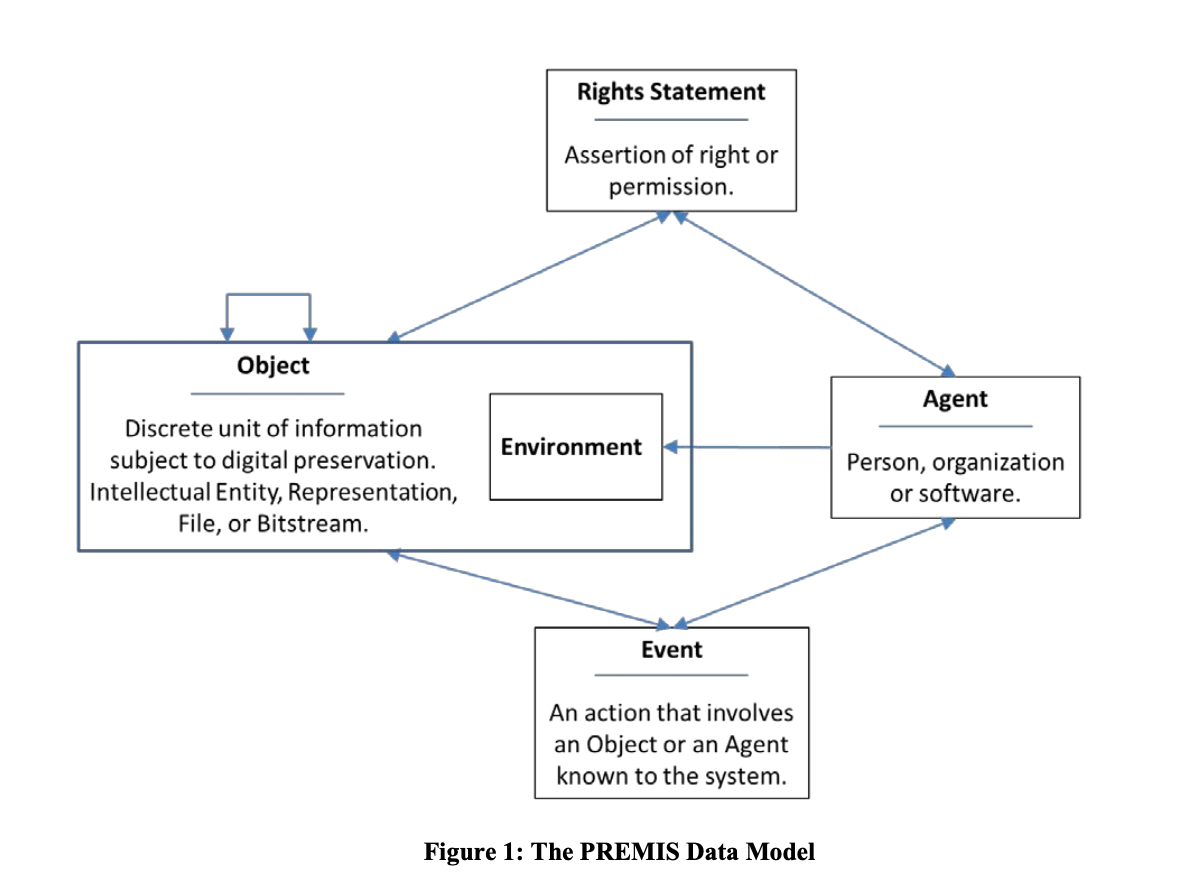 The PREMIS Data Dictionary defines semantic units; each of which is mapped into an entity that is organized within a simple data model (semantic unit = property of an entity). The PREMIS Data Model identifies four entities important to digital preservation:

Object (or Digital Object): a discrete unit of information subject to digital preservation. 5 Version 3 introduces the notion that this can be an environment used as part of the preservation process.

Environment: Technology (software or hardware) supporting a Digital Object in some way (e.g. rendering or execution). Environments can be described as Intellectual Entities and captured and preserved in the preservation repository as Representations, Files and/or Bitstreams.

Event: an action that involves or affects at least one Object or Agent associated with or known by the preservation repository.

Agent: person, organization, or software program/system associated with Events in the life of an Object, or with Rights attached to an Object. It can also be related to an environment Object that acts as an Agent.

Rights Statement: assertion of one or more Rights or permissions pertaining to an Object and/or Agent.