Jamie Schwab is a 15-year-old male patient of your practice who is brought in by his mother after reporting he had seen blood in the toilet when he had a bowel movement 2 days ago.

Jamie thinks it looked like “a lot of red blood” but flushed the toilet before telling his mom about it. When you ask more about his symptoms, he says that overall, he has felt well. He has not had any fever or chills and has not traveled anywhere since going to Florida last Spring Break with his parents. He denies any recent illness or sick contacts, abdominal pain, dizziness, weakness, shortness of breath, nausea/vomiting, diarrhea, or problems urinating. He also denies having any constipation, but his mom says when he forgets to flush his stools are “huge” and that they frequently block the toilet. When asked, she also says she sees “skid marks” in his underpants at times. Jamie becomes horribly embarrassed and won’t talk any further about his bowel movements or symptoms.

He tells you that he considers himself healthy as he is on his high school wrestling team and practices 3 times a week.

Surgical History: He has his adenoids and tonsils removed he was younger. He has not had any other surgeries.

Family History: Jamie’s father is obese and has hypertension and hyperlipidemia. His mother has type 2 diabetes. He has 2 younger sisters in good health.

Social History: Does not drink alcohol, smoke, or vape. He does admit that he has tried marijuana with his teammates in the past but does not currently smoke. He tells you his diet is “okay”, but he hates eating vegetables. He has never been sexually active.

CV: Regular rate and rhythm, no murmurs, rubs, or gallops

Pulm: Clear bilaterally, no crackles or wheeze. No increased work of breathing.

You prescribe a high fiber diet and instruct Mrs. Schwab and Jamie on the proper dose of polyethylene glycol to take for suspected constipation. You order a complete blood count with a follow-up appointment scheduled in 4 weeks.

You call his mom and ask her to take him back to the lab for additional blood work, which returns:

You call his mother to discuss the results, and she says that Jamie denies having any more blood in his stools and says he feels fine, with a normal appetite and activity level. He takes the polyethylene glycol most days and although he doesn’t want to discuss stool habits with his mom, she thinks his constipation is better. You agree to  keep the 4-week follow-up appointment and repeat blood work at that time to assess his anemia.

A week later, Mrs. Schwab brings Jamie back to the clinic for a sick visit.  She reports he had been up all night with vomiting, watery diarrhea, and a fever of 101F. His whole wrestling team has been sick with a “stomach bug” that lasts a couple of days, but since he had had the blood in his stool previously, she thought she had better bring him in to be checked.

He is given an oral dose of Zofran in the office and is then able to keep down oral fluids in the office and so is discharged home with a prescription for Zofran and instructions for oral rehydration therapy. When you call the following day to check on him, he is still having some diarrhea but feeling much better overall and is maintaining his own hydration.

Two days later, his mother brings him into clinic in the morning for an urgent sick visit. Jamie started having episodes of severe abdominal pain last night, sometimes with vomiting. The pain happens without warning and makes him cry out, lasting for several minutes at a time. The episodes repeat every 15-30 minutes or so, and taking Tylenol or Motrin has not made it better. His vomit started to turn yellow-green this morning, and he has not urinated for the since midnight.

Exam shows: T 99.5 HR 120 BP 100/50 RR 12 Sp02 99%, and Jamie looks ill and exhausted. His abdominal exam shows slow to absent bowel sounds, and is tender to palpation, more so than previously, and he pushes the examiner’s hand away from his right lower quadrant.

The pediatrician calls the children hospital and directly admits Jamie to the hospitalist service for IV fluids, pain control, and additional testing. He has strict NPO orders so his abdominal pain is controlled with iv analgesics.

Abdominal CT with oral contrast is shown below: 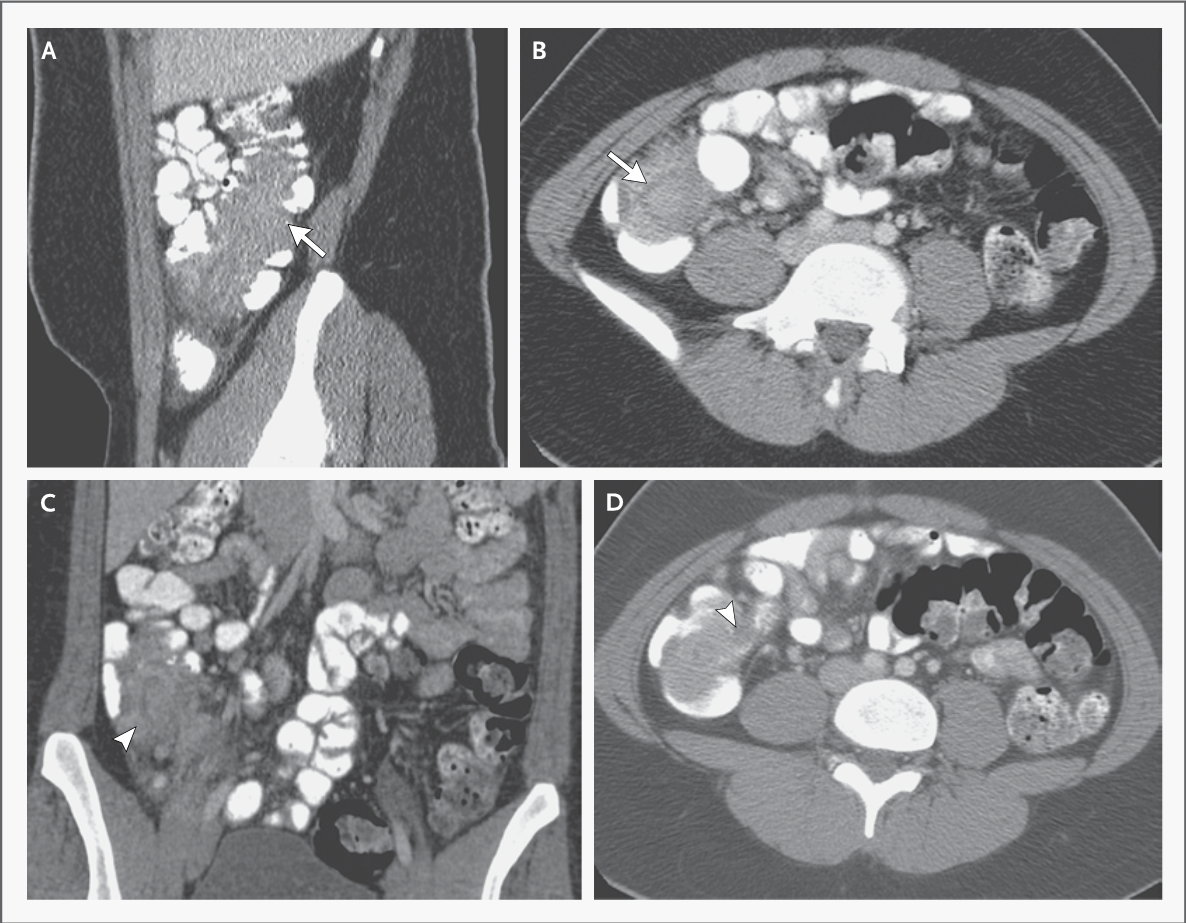 Images of his abdominal CT shows a 10 cm mass proximal to and involving the ileocecal valve:

The pediatric surgery team is consulted and Jamie is taken to the fluoroscopy suite for a double-contrast barium enema, which demonstrates intussusception and this is subsequently reduced uneventfully.

Jamie is returned to his hospital room and IV fluids continued. He initially rests well, but a couple of hours after the procedure complains of increased abdominal pain, nausea and shortness of breath.

Abdomen is firm and pain increases with light tapping over any area of the abdomen as well as with hitting patient heels with fist with legs in locked extended position. He is unable to stand upright due to pain, and refuses to move to roll over due to pain.

The surgery team is notified of this change in his status, and examines him as well as orders an X-ray, shown below: 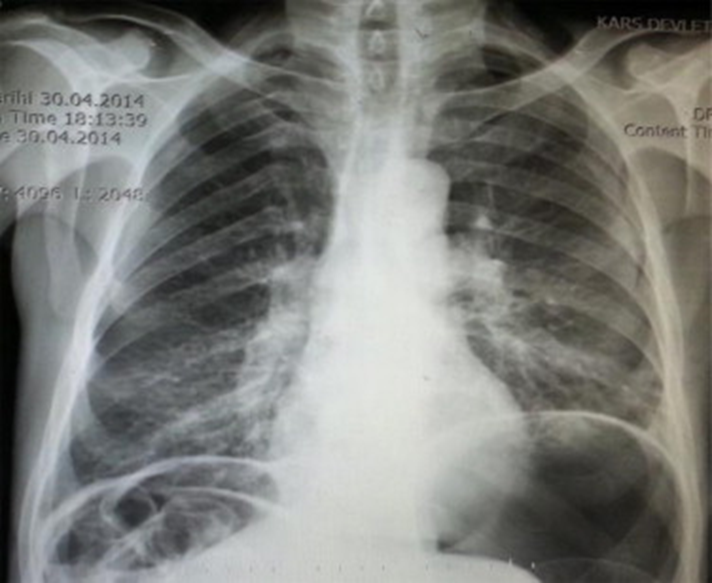 Due to the findings on physical exam and abdominal x-ray, Jamie is given a bolus of Lactated Ringer’s, started on IV piperacillin/tazobactam, and taken to the operating room for an emergent exploratory laparotomy.  His cecum and small bowel are delivered onto his abdominal surface for better exposure, revealing an abnormal outpouching of the ileum about 20cm from the ileocolic valve. Clinical images are obtained and one is shown below. Examination of the abnormality shows hemorrhagic necrosis and perforation of the serosal layer. The outpouching is excised, the normal ileum anastomosed, and no additional abnormalities are seen with running the rest of the small bowel or in the abdominal cavity. His intestines are returned into his abdominal cavity, and his abdomen is closed. Estimated blood loss is 50mL. Using ultrasound guidance, local anesthetic is injected on both sides of his abdomen to assist with post-operative pain control. He is awakened, extubated and taken to the recovery room where he has an uneventful short stay before returning to his hospital room. 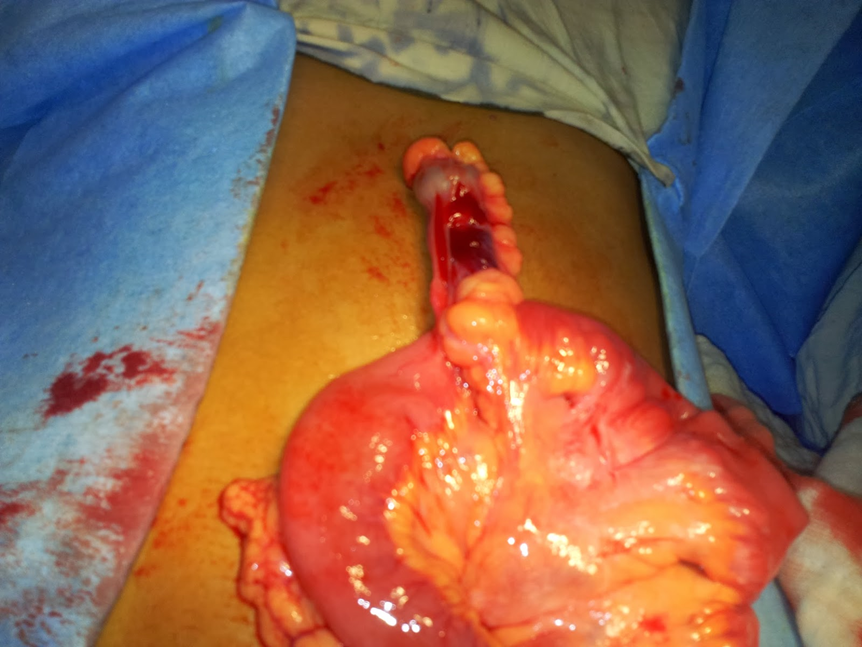 The excised abnormality is sent for pathologic examination, and histology is shown below.

During family-centered rounds in the morning, Jamie’s mom asks for more information about his condition. Specifically, could his “terrible” diet have contributed, was it the cause of the bleeding he reported to his pediatrician and could it happen again? Jamie asks when he can return to wrestling.

After a few days in the hospital, Jamie’s pain is controlled with Tylenol, he has tolerated food by mouth, stooled and is able to be discharged home.