Jamie Schwab is a 15-year-old male patient of your practice who is brought in by his mother after reporting he had seen blood in the toilet when he had a bowel movement 2 days ago.

Jamie thinks it looked like “a lot of blood” but flushed the toilet before telling his mom about it. He did not have any abdominal pain or nausea and has otherwise felt well. He has not had any fever or chills and has not traveled anywhere since going to Florida last Spring Break with his parents. He denies any constipation, but his mom says when he forgets to flush his stools are “huge” and that they frequently block the toilet. When asked, she also says she sees “skid marks” in his underpants at times. Jamie becomes horribly embarrassed and won’t talk any further about his bowel movements or symptoms.

His vital signs and orthostatic heart rate and blood pressure measurements are normal. Examination of his abdomen shows that is it soft and he has no tenderness with palpation. His bowel sounds are normal, and a rectal exam shows a small nonthrombosed external hemorrhoid and an empty rectal vault.

You prescribe a high fiber diet and Miralax for suspected constipation and order a complete blood count with a follow-up appointment scheduled in 4 weeks.

His blood count returns and shows:

You call his mom and ask her take him back to the lab for additional blood work, which returns:

You call his mother to discuss the results, and she says that Jamie denies having any more blood in his stools and says he feels fine, with a normal appetite and activity level. He takes the Miralax most days and although he doesn’t want to discuss stool habits with his mom, she thinks his constipation is better. You agree to keep the 4-week follow-up appointment and repeat blood work at that time to assess his anemia.

A week later, she brings Jamie in for vomiting and diarrhea. He has been up all night throwing up and having watery diarrhea and has a fever to 101F. His whole wrestling team has been sick with a “stomach bug” that lasts a couple of days, but since he had had the blood in his stool previously she thought she had better bring him in to be checked.

Exam this time shows tachycardia and fever with some mild tenderness to palpation and hyperactive bowel sounds. His skin turgor is normal, and his pulses are intact. Mucus membranes are tacky and his mental status is normal. He is given an oral dose of Zofran in the office and is then able to keep down oral fluids in the office and so is discharged home with a prescription for Zofran and instructions for oral rehydration therapy. When you call the following day to check on him, he is still having some diarrhea but feeling much better overall and is maintaining his own hydration.

2 days later, his mother brings him into clinic in the morning for an urgent appointment. Jamie started having episodes of severe abdominal pain last night, sometimes with vomiting. The pain happens without warning and makes him scream out, lasting for several minutes at a time. The episodes repeat every 15-30 minutes or so, and taking Tylenol or Motrin has not made it better. His vomit started to turn yellow-green this morning, and he has not urinated since midnight.

Exam shows: T 99.5 HR 120 BP 140/75 RR 12 Sp02 99%, and Jamie looks ill and exhausted. His abdominal exam shows slow to absent bowel sounds, and is tenderer to palpation than previously, and he pushes the examiner’s hand away from his right lower quadrant.

The hospitalist physician admits Jamie to the hospital for IV fluids, pain control, and additional testing.

Images of his abdominal CT shows a 10 cm mass proximal to and involving the ileocecal valve, shown below with arrows: 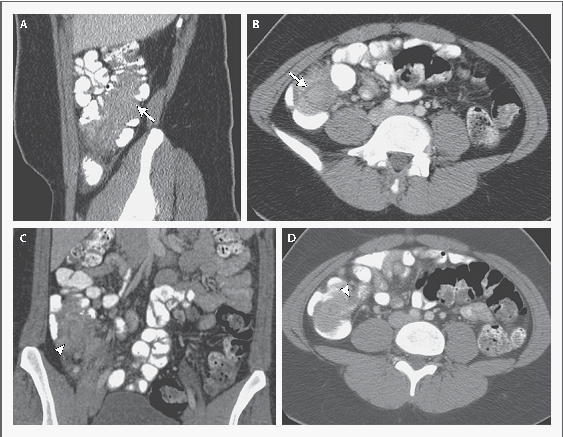