In the spring of 1961, as college students across the south demonstrated for the integration of restaurants, theaters and other public accommodations, a group of high school students in Louisville, Kentucky took the lead in challenging segregation.

On February 9, 1961, a group of African American students from Male and Central high schools (members of the Congress of Racial Equality (CORE) and the NAACP Youth Council) staged a sit-in at the lunch counter of Louisville’s largest department store, Stewart’s Dry Goods. In the weeks that followed, demonstrations were organized at other department stores, theaters, and the Blue Boar cafeterias. As the demonstrations ramped up throughout the spring, supportive adults started working with the students to help them organize and facilitate trainings in non-violent resistance.

The passion and zeal of the students re-invigorated Louisville’s African American adult leadership. Local media coverage, in the Louisville Defender and Courier Journal, of the demonstrations and student arrests kept the demonstrators’ message top-of-mind in the greater community. Broader public awareness and growing numbers of student participants led to an inter-generational effort to launch an economic boycott of segregated business that became known as the “Nothing New for Easter” campaign.

The battle for equal treatment in public accommodations was a long one. It took city leaders until May 1963 to pass an open accommodations ordinance. Their vote came amid African American leaders’ threats of mass demonstrations and fears over violent eruptions in other southern cities over segregation.

This exhibit shares the stories of a small number of the thousands of people involved in this particular fight for justice in Louisville 50 years ago. Hear their stories about why they felt they needed to act. Find out what it was like to prepare and participate in one of the demonstrations. Listen to stories of how some parents reacted to their child’s arrest. Learn about the ways some whites supported the students’ efforts. Discover how these events 50 years ago forever changed Louisville.

Source: K’Meyer, Tracy E. Civil Rights in the Gateway to the South: Louisville, Kentucky, 1945-1980. Lexington: The University Press of Kentucky, 2009. 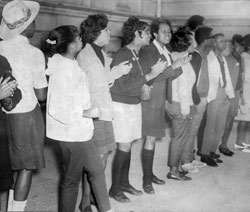 Teenagers rally for the right to be served at Louisville theaters, restaurants, and department stores, 1961.