Mr. Lucien Davenport is a 69-year-old patient who has been your clinic patient for the last 3 years. He is originally from New Orleans, but he and his wife relocated to Louisville where their daughter lives following loss of their home in Hurricane Katrina. You typically see him every 3 to 4 months to maintain control of his type 2 diabetes, hypertension, hyperlipidemia, gout, and peripheral vascular disease. In the last year, he has missed a couple of regular appointments despite rescheduling and calling him personally. When you call him to see why he did not come to clinic, you learn that his wife of 43 years died 9 months ago, and he promises to come back to clinic for his next regularly scheduled visit in a couple of months.

Before that appointment occurs, his daughter JoAnn brings Mr. Davenport to the ER for a gout flare. She also asks to speak to the social worker in private due to her concerns about Mr. Davenport’s safety at home. The ER social worker records the concerns in her notes and coordinates moving his appointment with you up to the following week to both follow-up on his gout flare and talk to him and his daughter about how things are going at home.

Daughter privately reports (in hallway where she asked to speak without client, who is her Father) finding spoiled food out at home and finding stove left on for unspecified period at least once. Daughter reports that Father will not show her the checkbook or bills or give her access to the checking account shared with her Mother prior to Mother’s death. She also found collection notices piled at doorstep with uncollected mail. Daughter reports weight loss in Father and periods of confusion about year and whether Mother is still alive. Daughter reports Father is not showering or shaving as usual. Daughter also reports she took the car keys away out of fear that Father would drive and hurt himself or others. Daughter also reports that Father has a collection of guns in the house and that they are loaded. When encouraged to discuss her concerns with Father in front of Social Worker, Daughter refused, saying he would get angry and leave the ER. Social Worker advised Daughter of resources available with mental inquest warrant procedure and crisis line for Adult Protective Services if she is worried about her father’s imminent danger to self or others.

Patient’s willingness to share and discuss his care with the daughter is assessed, and he refuses this permission. His level of education and financial situation were assessed. He has a 9th grade education and was employed previously as a maintenance man in the public school system in Louisiana and has been retired since relocating to Louisville. He and his wife had pensions to support their expenses, and hers has been discontinued since her death 9 months ago. His pension with social security amounts to $2677 per month, and he lives in a small home that he and his wife purchased with insurance money following Katrina. His daughter lives a few miles away and is his only remaining family. His wife had a $30,000 death insurance benefit that was used to pay her funeral expenses and remaining healthcare bills after she died of pneumonia due to COVID-19 9 months ago. The couple attended the local Southern Baptist church at the wife’s preference until her death, and he has not attended since. He has not identified a financial or medical surrogate decision-maker, and has no advanced directive in place. He refuses to discuss the possibility of planning for these during today’s interview.

He reports to Social Worker that he has been “down” since his wife died and that she “used to cook and do the bills” and he has not “felt like doing any of that.” When asked about weight loss, he says he is eating, but not as well as when his wife was alive because “she was a great cook.” When asked about the financial consequences of not paying bills, he gets angry and says “I’m not a child, I’ll get to it. They aren’t even that behind” and then says his daughter needs to “mind her own business” and that “she wants my money so she doesn’t have to wait to inherit it. She has all of this credit card debt and is about to get kicked out of her apartment.” When asked who he could call if he was in crisis and needed someone to talk to, he said “I guess not my daughter since she’ll just get you guys to lock me up and then take all my money!”

Social Worker assessed client with MoCA and received a score of 16, with some questionable lack of cooperation from client due to his frustration with interview. When offered a follow-up in-home visit, client refused. Client was given the phone numbers for local spouse bereavement groups and suicide hotline. Client was cooperative with medical staff during remainder of ER visit and was transported home by Daughter.

In clinic the following week:

After reviewing the social work note, you called Mr. Davenport’s pharmacy ahead of his appointment and find that he has not refilled his prescriptions in 2 months. His triage blood pressure is 185/101, and although his appearance is usually dapper, he is wearing clothes that look and smell dirty, and his hair and beard are not groomed.

Mr. Davenport is accompanied by his daughter, JoAnn. He accepts your condolences on his wife’s death and affirms that his foot is better with the treatment of his gout flare.

When he reports things are “fine” at home, his daughter shares that she is worried that he can’t take care of himself. He gets very angry with his daughter and tells her to leave the clinic room, which she does.

You discuss carefully with him that his medications have not been refilled and that his blood pressure is uncontrolled, and he admits to “not getting around to” picking up his medicine, plus “his daughter stole his keys and is driving his car all over and won’t give them back.” He insists he takes the medication sometimes, just is not good about taking them every single day at the same time. You also ask about appetite, sleep, mood, and interest in daily activities, and he states that his wife “was in charge of making sure everything went right” and that it is overwhelming to take care of everything himself. He does admit that he has been more forgetful lately, but says he just thinks it’s because of missing his wife and getting older anyway. You ask about leaving the stove on and he laughs and says “Probably the game was on and I just forgot about it.”

You question Mr. Davenport about alcohol intake and illicit drug use, and he denies either. He reports occasionally feeling sorry for himself but, when asked about the weapons in his home, he denies thoughts of suicide stating, “it would not be fair to his daughter.”

You administer the Mini-Cog assessment, and he scores a 2 with the clock as shown below when instructed to show the time “11:10”: 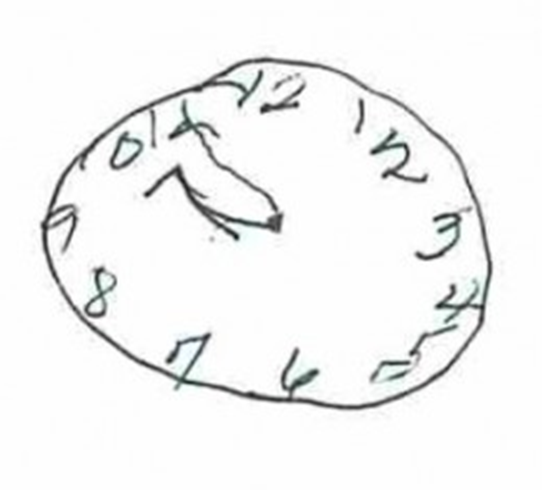 You discuss with him the possibility of depression or a medical problem that could be making memory problems worse and bring into the discussion the need to control his blood pressure and other medical problems to decrease his risk of “mini-strokes” which would make things worse. He agrees to pick up his medication on the way home and use a pill box and as well as a prescribed alarm to help him remember to take the meds. You order additional memory testing along with blood work and arrange a follow up appointment in 1 week. He agrees on the condition that if he does all of the testing and does well, he gets his car keys back from his daughter.

Hepatic function panel is normal except an albumin of 2.8. Electrolytes show a BUN of 7 and a creatinine of 2.1 (baseline 1.8.)

He returns in one week to discuss results of his lab work and memory and mood testing. He is visibly upset to learn his exams are consistent with dementia. You reassure him that further testing may identify a reversible cause, but regardless, he can receive assistance to maintain his independence and treatment that may improve his functionality. The social worker will help coordinate home health to improve compliance with medications and therapies to improve independence with ADLs. His daughter agrees to assist with IADLs. He requests reassessment after trialing this treatment plan.