HPI: Jace Nichols is a 17-year-old male who was brought to the ER by his mother via EMS for shaking and falls.

At 8 pm on a weeknight, he was walking to the kitchen to get a snack and his legs started shaking. He said, “Mom, help me” and then his legs buckled and he fell onto a carpeted floor. When she tried to help him up, his legs were too weak to stand or walk unsupported. She helped him back to the couch, where he told her “my right hand feels weird.” She asked him to show her his hand, and he was able to raise it from the couch but kept missing when she was trying to get him to put his hand in her hand.

His mom called 911, and in the 20 minutes it took for the ambulance to arrive, Jace’s speech became noticeably slurred. The ambulance transported him to the local ER, where he also complained of blurry vision, pain in the back of his head, and dizziness/lack of balance.

MVC with a closed head injury 2 months prior that resulted in a small subarachnoid hemorrhage that did not require surgery. He initially suffered some headaches and increased difficulty with memory but that had fully recovered.

Mild learning disability that has been present all of his life

Family history: He has a maternal uncle with epilepsy, and a maternal cousin that died of a lysosomal storage disorder in her 20’s. His paternal grandfather died of a pulmonary embolism while being treated for colon cancer, and his paternal grandmother had died of a stroke. He is the third of three children, and all the other siblings are healthy.

Social history: He is currently employed full-time as a construction worker, smokes ½ ppd and uses chewing tobacco. His mom reports that he has smoked marijuana in the past but quit when his parents threatened to kick him out. He lives with his mom, dad and siblings. He comes from a very religious family and attends church three days a week.

General: healthy appearing male, well-nourished and normally developed. When trying to sit upright on the side of the bed, he keeps falling to the left.

HEENT: pupils equal and responsive bilaterally, mild nystagmus seen bilaterally with drooping eyelids and somewhat dysconjugate eye movements, although no particular side or direction seems to be the consistent course of the problem. He is unable to distinguish the letters on the second line on the vision screening chart in the ER, complaining the letters are blurry. No carotid bruits. Oropharynx normal.

Musculoskeletal: no joint deformity, no injuries

Neurologic: Alert and oriented, slow to respond. Speech slurred and difficult to understand. Laughs inappropriately at times and is unable to stop, when asked if he thinks something is funny he says no. Unable to test gait due to postural instability. 1+ deep tendon reflexes bilaterally, with normal tone. Dysdiadochokinesis noted with testing, and finger-to-nose testing slow with occasional missing. Romberg not tested due to postural instability. Visual field testing normal but limited by patient report of blurred vision. CN II-XII tested and normal.

Additional course: About 90 minutes after arriving in the ER, Jace’s arms and legs started shaking all over and although he was able to look at his mother when she spoke to him, he would look at her but couldn’t speak in reply. After about 15 minutes of this condition, he became unconscious and his legs and arms were stiffly extended, with increased stiffening with any stimulation.

He was sedated and intubated, and an MRI/MRA was done (pictured) followed by cerebral angiography. Imaging is finished about 11 pm, and a diagnosis is made. 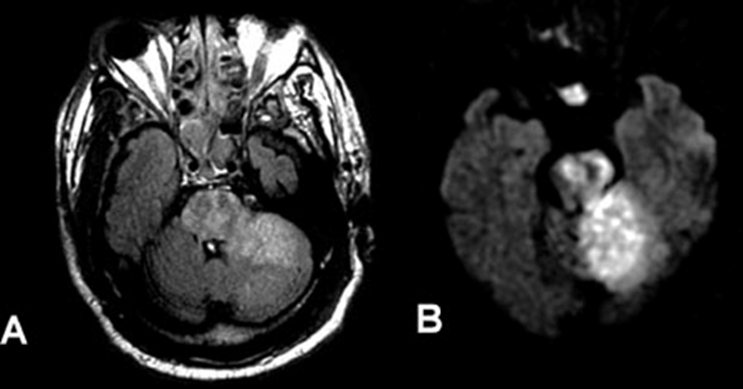 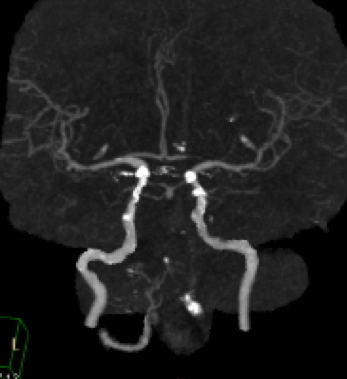 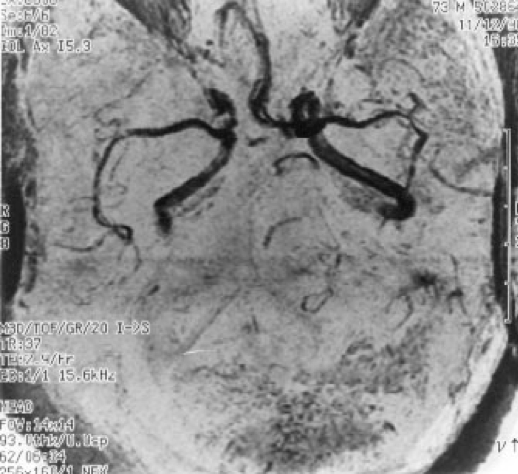 Jace’s family is informed of his diagnosis, and the decision whether to give him tissue plasminogen activator is discussed. His medical team informs the family that the risk of bleeding is very high, but that his prognosis without thrombolysis is very poor. His family prays together over the decision, and then asks the medical team to administer the TPA regardless of bleeding risk.

He is carefully observed in the ICU and no intracranial bleeding occurs. However, his neurologic exam only minimally improves, with the resolution of the extensor posturing but no responsiveness to external stimuli, even once his sedation is stopped. He remains ventilator-dependent one week after his initial presentation to the hospital. As part of standard post-stroke care, an echocardiogram is ordered, as are tests for hypercoagulable states. A patent foramen ovale is identified as a potential cause of his stroke. In addition, he is found to be heterozygous for a prothrombin gene mutation.

Jace’s medical team discusses his care with his family daily. At the beginning of the second week, the ICU attending and neurologist call a meeting with the family, nursing staff, social work, and the pastor. Jace’s condition is discussed and the prognosis is explained to the family as poor. He has never regained consciousness and does not interact or respond to external stimuli or show any spontaneous movement. His family is told that it is not likely he will ever awaken and interact with them again based on the location of the stroke and that he has not regained consciousness after a week of care. He is unable to eat or drink and is being fed via a tube in his nose that goes to his stomach. His breathing when the ventilator is paused is not sufficiently regular or deep enough to keep his body going long term, although he does have some spontaneous respirations. He does not meet brain death criteria but is thought to have nearly zero chance of meaningful recovery of the ability to interact with the world.

The question of whether and how long to maintain the current level of life support is next brought up by the medical team with the family. In the next week, if the current level of life support is to be maintained, a tracheostomy must be placed as well as an external feeding tube. The family and pastor explain that their beliefs are clear; if there is any physical manifestation of life, it must be maintained using any measures possible as the community and family pray for a miracle. They ask the medical team to go ahead with the plans for tracheostomy and feeding tube, and to continue all treatments that could potentially be life-prolonging.

Jace remains ventilator dependent, and a tracheostomy and G tube are placed in the following week. Closure of his patent foramen ovale is discussed but considered too risky given his recent critical illness. He is maintained on heparin therapy while warfarin is titrated to a therapeutic INR. His family is unable to care for him at home due to the intensity of his needs, so he is transferred to an acute rehabilitation hospital 2 hours from home. His family continues to visit weekly, but his condition gradually deteriorates. Over the next year, he develops recurrent ventilator-associated pneumonias, urinary tract infections and pressure wounds that require hospitalization to stabilize prior to returning to the long-term care facility.

At 13 months from his initial presentation, he is hospitalized for a bloodstream infection with a multi-drug-resistant bacteria. Besides mechanical ventilation and artificial nutrition, he requires vasopressor support to maintain an adequate blood pressure. After a discussion with the ICU and palliative care teams, his family requests that mechanical ventilation and vasopressors be discontinued, and he be allowed to die naturally surrounded by family. He is given sedatives for comfort, liberated from life-sustaining measures, and dies 3 hours later.