Greer Manning is a 45-year-old female patient who is seen for a well woman exam with her new OB/Gyn Dr. Pfyfe. When completing the online registration, she lists the following family history:

Her personal medical history is reviewed in light of her family history, and Dr. Pfyfe confirms that Ms. Manning had an abnormal Pap smear 15 years ago treated with cryotherapy and has had normal Pap smears since.

She has had multiple miscarriages in the 6- to 8-week gestation range and attempted in-vitro fertilization twice ten years ago without carrying a pregnancy to term. She has not had any abnormal bleeding and has regular monthly periods. She took combination oral contraceptives in her twenties but stopped around the age of 30. She smokes several cigarettes a day and drinks about 7 alcoholic beverages a week.

A week after this visit, Ms. Manning is asked to return to discuss abnormal results on her Pap smear.

When she meets with Dr. Pfyfe, she tells her that she had an abnormal type of cell on her Pap smear that raises concern for endometrial health. Ms. Manning asks what kind of cell and the OB shows her the report, which says “atypical glandular cells seen, evaluation for endometrial neoplasia recommended.” Dr. Pfyfe explains that the significance of the finding will not be known unless additional tests are performed and sets up an appointment for the patient to have cervical cone biopsy with dilation and endometrial curettage in the operating room. This procedure is performed a week later and the specimens are sent for pathologic analysis.

Ms. Manning is shocked and tearful and asks several questions about what to expect. Dr. Pfyfe explains that with a new diagnosis of cancer, the priority is to complete a search to see if the cancer has had a chance to spread. Since her cancer has progesterone and estrogen receptors, Dr. Pfyfe recommends additional surgery to remove her ovaries and then medication to block the receptors on the tumor for these hormones. Dr. Parker, a gynecologic oncologist, is consulted to help complete the next steps in her care.

Dr. Parker is very kind but gets down to business, reviewing her family and personal history and performing a pelvic examination. She explains to Ms. Manning that more testing is needed to see the extent of surgery required and if additional treatment with chemotherapy or radiation might be needed as well as to measure her baseline health.

Dr. Parker orders a CT of the chest, abdomen, and pelvis as well as an EKG, a complete blood count (CBC), comprehensive metabolic panel (CMP) and coagulation profile.

Ms. Manning follows up the next week where she receives further bad news. There is a 3 x 2 cm lesion in a lobe of the liver concerning for possible metastatic disease, as well as heterogeneous enhancing mass of the lower uterine segment extending into the endocervix and overall uterine enlargement. Dr. Parker shows Ms. Manning images from her CT scan that show the abnormal appearance of her uterus. 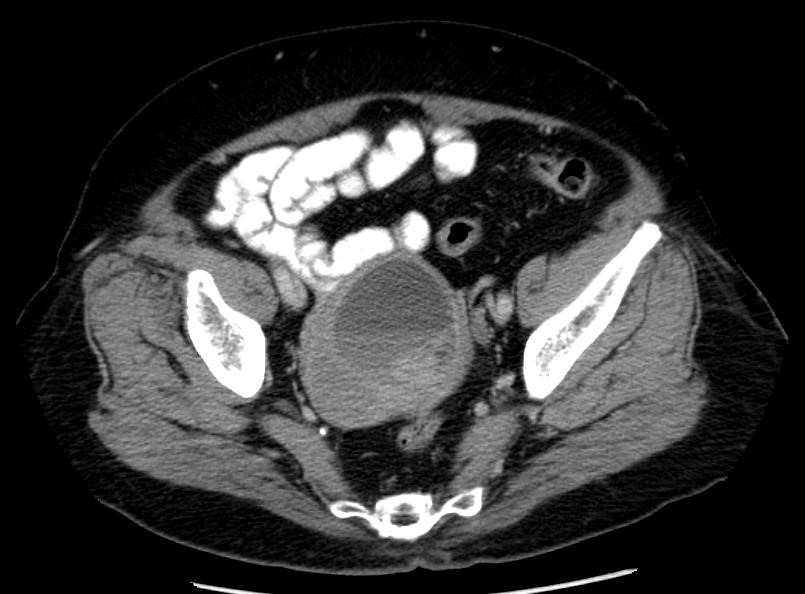 She also notes that Ms. Manning has a microcytic anemia, with a hemoglobin of 9.5 and an MCV of 67. Review of prior blood work from two years ago shows this is a new finding. She tells Ms. Manning that since she has a normal diet and no history of heavy periods or other source of blood loss, she wants her to get an evaluation by a gastroenterologist, Dr. Frazier, before any surgery is planned.

Dr. Frazier performs an esophagogastroduodenoscopy (EGD) and a colonoscopy the following week which revealed a 3cm partially-obstructing mass of the mid-descending colon, but no other abnormalities. The gastroenterologist orders a CAE level and refers her to Dr. Snell, a general surgeon, to follow up on the results and plan a possible surgery in conjunction with Dr. Parker.

Dr. Frazier calls Ms. Manning 2 days later and confirms that the biopsy returned positive for a low-grade adenocarcinoma of the colon and that her CAE level is 7.6ng/mL (normal range is 0-2.5ng/mL). He tells her this means she has an additional diagnosis of a second cancer and that he is very concerned about the lesion in her liver possibly being a metastatic colon cancer. Ms. Manning is devastated. Dr. Parker and Dr. Snell discuss Ms. Manning’s care and present a plan for a team surgery that will consist of a hysterectomy, bilateral salpingo-oophorectomy, partial colectomy with temporary colostomy, liver biopsy and abdominal cavity and lymph node exploration. Ms. Manning consents and undergoes surgery two weeks later, 9 weeks after her initial visit to the OB/GYN.

The pathology report and appearance of the surgical specimens are shown below: 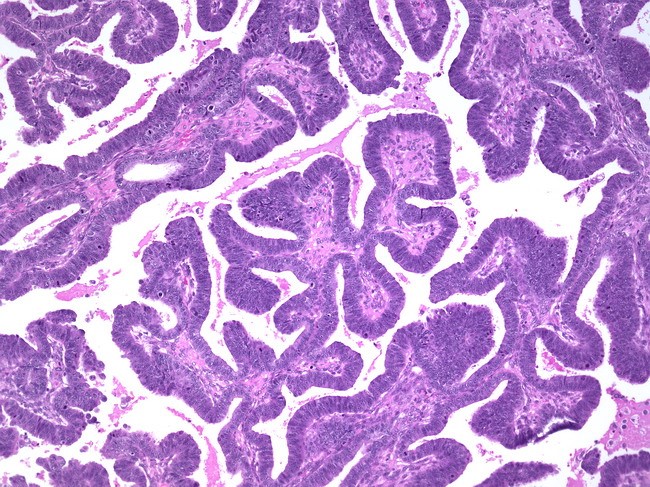 Pathologic examination of the ovaries: shows stage 1B serous adenocarcinoma, low grade, with endometriosis in both ovaries. 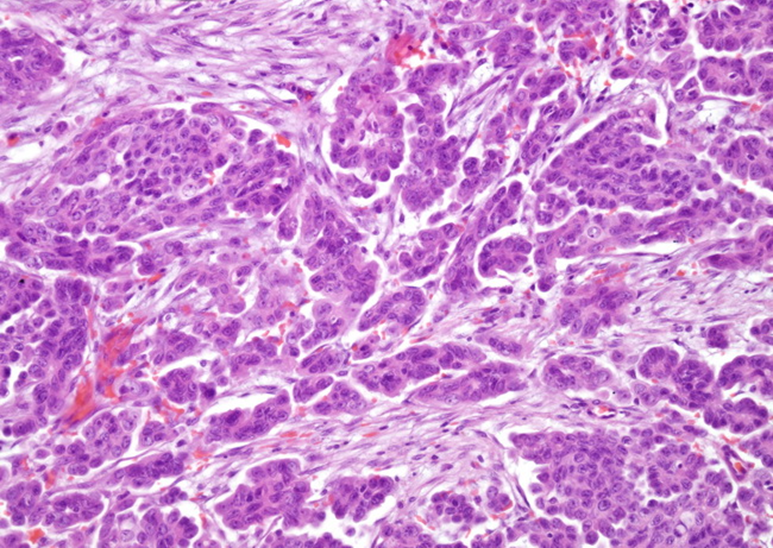 Pathologic examination of the colon resection: low-grade adenocarcinoma of the descending colon, 2.5 cm in diameter, extending into the muscularis propria but not into the subserosa. Surrounding lymphocytic infiltrate. 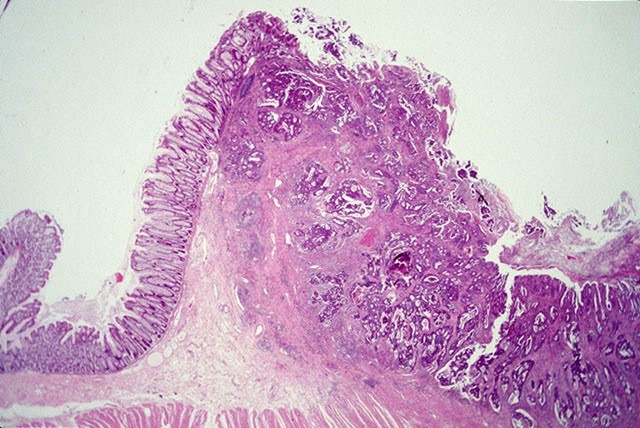 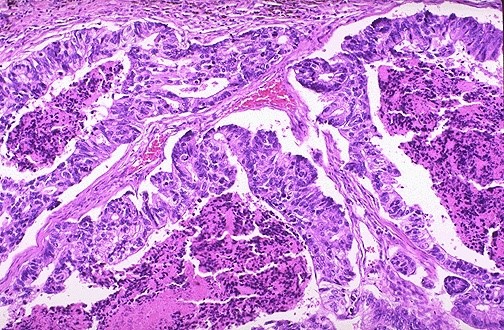 Cytological examinations of regional lymph nodes and pelvic washings were negative for carcinoma, and her liver biopsy was found to be an adenoma requiring no additional follow-up.

Her surgery goes as expected and Ms. Manning has a smooth recovery.   At her follow-up appointment, her doctors recommend genetic evaluation for a possible underlying cause for her multiple simultaneous cancers. Ms. Manning is evaluated by Dr. Hersh, a geneticist with the Adult Genetic Diseases program at UofL. He creates a family pedigree and then tells her that based on her family and personal history, she meets criteria for a diagnosis of a genetic cancer syndrome and he recommends genetic confirmatory testing. He offers two forms of testing:

Dr. Hersh explains that the first form of testing will confirm that HNPCC mechanisms were responsible for the formation of her specific colon cancer. The second form of germline testing will help identify the specific gene in her family and give other family members the option to get tested for the disorder. 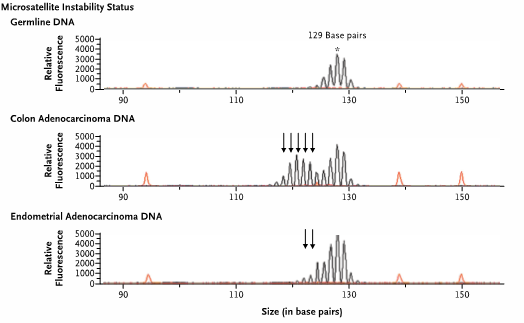 Analysis of Ms. Manning’s blood sample showed a loss-of-function germline mutation 942+3AàT in the MSH2 gene, consistent with it being the pathogenic lesion in Ms. Manning and her affected family members.

Ms. Manning asks what this information means to her in terms of risk of future additional cancer, or cancer recurrence. She also asks what these findings mean to her family members and if they need to get tested or take any special precautions.