“I always loved telling stories...My ‘thing’ were trying to get children to want to read. And the best way to accomplish that goal is to tell them a story.”

Barbara Miller had a shining career as a librarian-educator. She served as Children’s Librarian at the Western Branch Library, and later the Coordinator of Children’s Services at the Louisville Free Public Library. She served on the faculty at Spalding University, Louisville Municipal College, the University of Kentucky and University of Louisville. She was also well known as the “Storytelling Lady” on the popular local children’s television show, T-Bar V Ranch on WHAS television. 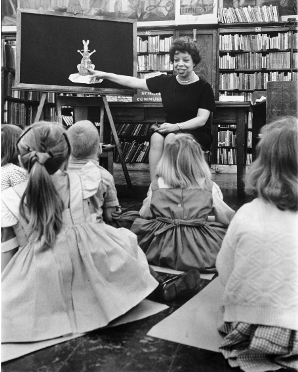 Even after her official retirement in July 1978; Ms. Miller’s advocacy for children’s literacy and storytelling continued as well as her numerous accomplishments:

She was a tireless volunteer and energetic civic leader, serving on more than ten different Boards including the J. B. Speed Art Museum, Kentucky Opera, Louisville Theatrical Association, African American Heritage Foundation and the Advisory Committee of the Louisville Free Public Library, to name but a few.

But Barbara Millers real legacy is in the people she touched through reading. In the words of Delinda Buie, a librarian at the University of Louisville Ekstrom Library:

When Barbara Simmons Miller became head of the Louisville Free Public Library Children's Department I was eight years old and well into reading my way through the children's section of the Crescent Hill branch. Mrs. Miller came as "The Story Lady" to visit our library and my younger brother plopped himself at her feet, but I stood in the back, trying to act sophisticated and literate.

Although our Louisville public schools, in theory, were integrated in 1959, the rest of our world was still highly segregated. Mrs. Miller was the first African American professional person I had ever met. And she was the sophisticated and literate person I aspired to be.

Ms. Miller was elegant. She sat, beautifully dressed, with ankles crossed and exquisite posture, amid a jumble of children. As she read aloud in her lovely modulated voice and precise diction, she turned the pages toward her audience. I wondered how she could see through the back of the book, and found myself opening my own eyes wide or forming my mouth into an "O" of astonishment along with her as the tale unfolded.

Barbara Simmons Miller enchanted children, inspiring us to become readers; and this one, at least, to become a librarian.

The simplest way to look at the Collection is to browse it! It is located on the third level of the Ekstrom Library. There are several ways to browse the collection online, such as: 1. Our online catalog WorldCat Discovery a. Do a search by author or title if you know them b. To see a long list of books • Do a keyword search on Multicultural Children's Books • Then sort them by University of Louisville Libraries, Format, title, author, or date of publication (see screen shot below).