"Alice Moore Dunbar-Nelson's poem is in the voice of a woman, during WW1, who wishes she were doing something more active to help the soldiers, rather than sitting and sewing. The book's format is modelled on a WW1 'housewife,' a soldier's sewing kit. As it unfolds, the viewer will find sewing tools and eventually the text."--Cf. Vamp & Tramp website

"Wendy Cain tells an amusing story about how she came to read all of Andrew Lang's Colour Fairy Books. Her Mother had died and the family moved into the city near a library. When she visited the library the librarian asked her what kind of books she liked. The librarian led her to the section of fairy tales. Cain visited this section for several weeks before an observant librarian introduced her to other book shelves in the library. Thus, began Cain's life of books." -artist statement Bound in colorful striped cloth. Includes three double page pop-ups and one pull tab pop-up.

Limited edition of 12 copies; all copies slightly different. "This book is entirely made of garbage, or stuff I had lying about. No new materials were purchased except the photocopying of pages. The covers are bottoms of mandarin boxes collected at Christmas. The socks and T-shirts were worn out ones raided from husband and son and self. The mitts and gloves were picked up on the streets as the snow melted. … The paper was left over from Wake up the Frog and Library Book. The thread was from when I used to do embroidery. The 'tapes' on which the pages are bound are mostly from knapsacks. The fake suede is leftover from the blinds I made when we moved into this house; also the insulation from other Roman shades. The rag rugs were from my mother's. … The text deals with the effect of garbage on our health.'"—Artist's statement, from bookseller's website. 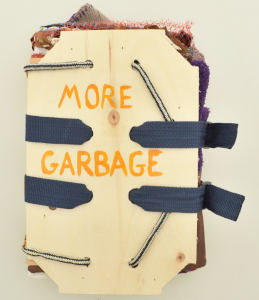 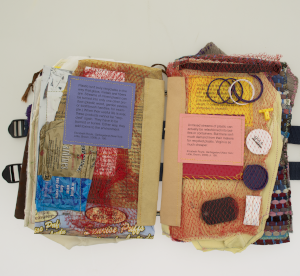