Digital exhibit based on the ornaments created by four foundries / printers curated by Gail Gilbert.

Dingbats, head and tailpieces, fleurons, lunettes, scrolls, no matter what you call them, printers’ ornaments were made to decorate the page. They derive from and continue the aesthetic that informed the decorative work in illuminated manuscripts. Printers continued the scribes’ tradition, using embellishments to mark the end of a passage or chapter, fill in empty space or add a decorative element to the page. These ornaments have been around since the invention of moveable type in the 15th century.

The embellishments and ornaments in this online exhibit come from several sources. The first is the American Type Founders Company Desk Book of Type Specimens, Borders, Ornaments, Brass Rules and Cuts, published in 1900. The American Type Founders Company was formed in 1892 by the merger of 23 separate type foundries. They merged to better compete with the newly invented typesetting machine, the Linotype. By the 1920s, ATF was represented in 27 cities in the U.S. and in Vancouver. ATF sold type as well as pressroom supplies and printing presses.

The second source is Modern Type Display and the Use of Type Ornament by Henry T. Wyse, Edinburgh, 1911. The purpose of this book was not to sell anything material, rather to influence type-display. Wyse writes in the preface, “The aim of this work is to call the reader’s attention of some possibilities in the arrangement of type and ornament.” Examples drawn from this book show a variety ornaments and a few type and ornament combinations.

The Bauer Type Foundry started in Germany in 1837. After almost going out of business at the end of the 19th century, it was sold and prospered to the point of opening a New York office in 1927. Weiss, UFA and Lucian fonts were sold by Bauer which are shown in this exhibit come from the third source, the Specimen Book of Bauer Types.

The last source is the Mergenthaler Linotype Company’s 1950 publication, One-Line Specimens of Linotype Faces. Mergenthaler was founded in 1886 to market the Linotype machine which simplified typesetting. The Mergenthaler examples are borders designed for holidays. 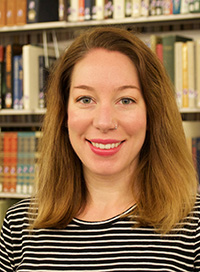 Send the Page Title and URL