You are called to evaluate a new patient in the emergency room in January for admission to the intensive care unit. He is unconscious and unable to provide a history, and his wallet identification states his name as Michael Brookdale, age 32.

The ER record contains the EMS run sheet, which states that Mr. Brookdale was “found down” after a passerby saw him lying down in an alley outside a shopping center in Buechel. His vitals at the time he was found were: T 93.2 (oral), HR 37, RR 6, BP 80/40, SpO2 85%. His Glasgow Coma Scale was 3, and he was intubated in the field, intermittently bagged, and transported to the University ER.

In the ER, mechanical ventilation was initiated, he was examined, placed under a warming blanket, given warmed “banana bag” IV fluid boluses, an indwelling urinary catheter placed, and multiple labs sent at arrival. Your ICU team is called to take over management.

His general survey shows an unresponsive, emaciated Caucasian male who appears older than his stated age, lying on a backboard.

HEENT: pupils are pinpoint and unreactive. Mucus membranes are dry, and dentition is poor with caries and missing teeth. Jugular veins are flat lying supine, and he is in a cervical collar that is not removed for examination. He has an ecchymosis surrounding his right eye that is yellowing and fading. His scalp does not have any apparent swelling or signs of trauma. Dried blood is seen in his right nare. TM’s are intact and normal.

CV: bradycardic, pulses palpable in all 4 extremities, extremities are cold with capillary refill > 4 seconds. No murmurs, rhythm is regular.

Pulm: clear bilaterally, logrolled and clear posteriorly, Bradypenic. No increased work of breathing. No percussion due to inability to sit patient upright as spine not cleared.

Extremities: no edema or signs of trauma

Neuro: Gag reflex present, deep tendon reflexes are symmetric, does not open eyes or respond to command or physical stimulation. Respiratory rate = 6 when ventilator paused.  Core temp at time of exam is 97.2 F.

While waiting for labs, your team checks the electronic medical record and finds that he has been hospitalized five times in the last two years for drug overdose due to various agents. On his previous visits, he stated that he is homeless and unemployed, and lives on disability checks. He has been referred to The Healing Place during those previous hospitalizations, but has refused their services. His next of kin is listed as a sister who lives in Tennessee. When called by your team, she says that she has “given up on him” and that your team should “just do what you think is best.” Your team consults the hospital social worker (who knows this patient from prior hospitalizations) to try to determine a different medical decision-maker during his critical illness.

Head CT, chest x-ray, and spinal x-rays are performed and are normal with the exception of old, healing rib fractures seen on the left.

Arterial Blood Gas: (prior to initiation of mechanical ventilation)

Despite being warmed to 98.4 F now, heart rate coming up to 77 bpm and being given multiple boluses of IV fluids, Mr. Brookdale’s hypotension worsens and he is started on an IV norepinephrine drip to increase his mean arterial pressures. A repeat blood gas and set of electrolytes 3 hours after the first set while Mr. Brookdale continues to be mechanically ventilated shows:

Due to this worsening, placement of central venous access and initiation of emergency dialysis is discussed. However, the social worker has been unable to find an additional family member or friend willing to accept responsibility for medical decisionmaking. The medical team decides to go ahead due to his critical status and place the dialysis access line and initiate dialysis. The post-placement chest xray shows a left-sided pneumothorax: 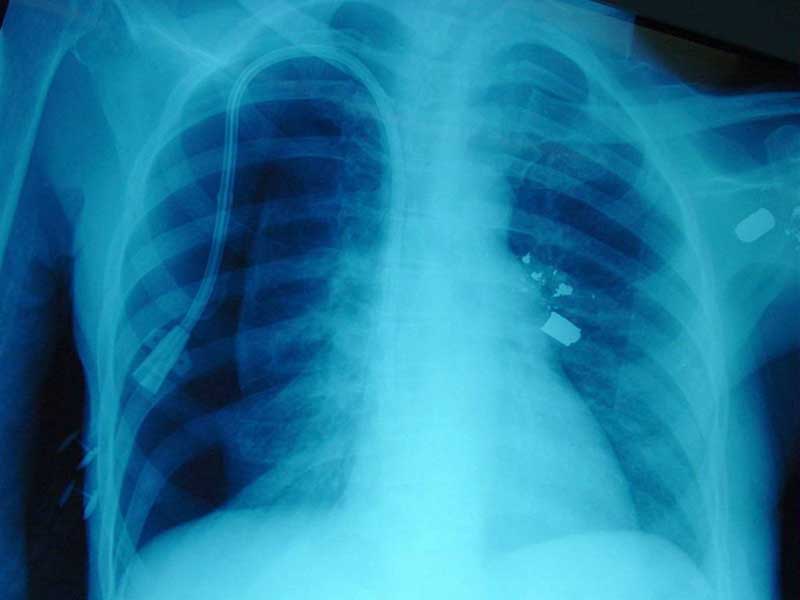 Chest tubes were placed on that side and put on low wall suction. An hour into dialysis, Mr. Brookdale’s cardiac monitor shows ventricular fibrillation, and his pulses are not detectable. ACLS protocol is initiated and he is coded for 45 minutes without the return of a pulse. His repeat chest x-ray during the code shows less air in the pleural space than the film taken prior to chest tube placement. After 45 minutes, the team calls the code and pronounces him dead. The case is referred to the coroner since death occurred within the hospital within 24 hours of admission and no next of kin is located.