HPI: Marcia Alvarez is a 21-year-old female patient who is seen in follow up by her physician for persistent cough and shortness of breath.

Six weeks ago, she sought care for nasal congestion, runny nose and cough. At that time, she was prescribed fluticasone nasal spray and oral loratadine, but she continued to cough. Her cough is always worse at night and sometimes she can’t seem to stop coughing and occasionally wheezes. During one of those episodes she borrowed her aunt’s albuterol inhaler and reports it provided some relief.

ROS: No fever or chills.  She has had intentional weight loss through Weight Watchers. She does not think her symptoms are any different at work than at home or elsewhere. No rashes or joint pain.

Her mom has a history of nasal allergies. Her sister has a history of asthma as a child.  Maternal uncle and cousin who both had leukemia. Not much is known about their history because that branch of the family lives in Puerto Rico.

Miss Alvarez moved to Kentucky from Puerto Rico with her family when she was 12 years old. She is currently a part-time student at the University of Louisville.  Ms. Alvarez works full-time at a preschool and has a pet cat. She lives in an apartment and does not have concerns about exposure to mold, insect or rodent infestation. She does not smoke or have second-hand smoke exposure. She does not drink alcohol or use any drugs.

MSK: no joint swelling or deformities, normal range of motion

The physician sends Ms. Alvarez over to the diagnostics lab for pulmonary function testing with and without albuterol. Her flow volume loop is shown. 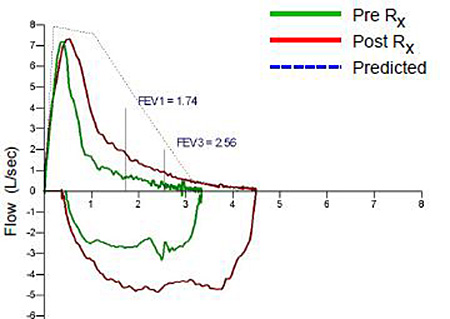 An albuterol inhaler with spacer and beclomethasone inhaler were prescribed and follow up was scheduled in two weeks. Miss Alvarez is concerned about being prescribed a daily steroid, saying “I thought that steroids can make you gain weight, I’m trying to lose weight. Also, don’t steroids cause diabetes?”  After further discussion, she is reluctant, but willing to try the medication every day to see if it would make her feel better.

Follow-up: At her follow-up visit, she reports some improvement in her cough but is still coughing nightly and feels like she still wheezes with activity and cannot be as active as she would like to be due to shortness of breath. She has been taking her inhaled steroid daily and using her albuterol at least four times a day as well as waking up once at night to use it. Her exam is unchanged. Her inhaled beclomethasone is discontinued, and she is started on a combination fluticasone propionate and salmeterol inhaler.

She called the office after 7 days to report no improvement and a new productive cough every morning. PFTs were repeated and showed a stable obstructive pattern with FEV1 only 65% of what is predicted for her size. Oral zafirlukast and a tiotropium inhaler were prescribed and she was referred to a Pulmonologist for further management.

Before she can be seen by the pulmonologist, her breathing and wheezing worsened and she presented to the emergency department. She reported increasing sputum production.

At presentation to the hospital her exam shows:

General survey: she seems anxious and uncomfortable and in moderate respiratory distress.

HEENT: nasopharynx is normal and there is no sinus tenderness she has no cervical lymphadenopathy or jugular venous distention.

Chest: she continues to show a prolonged expiratory phase with wheezing in both lungs. She does not have any crackles, egophony, tactile fremitus or dullness to percussion and there are no changes in the remainder of her exam compared to her initial exam.

Tests of blood clotting were normal, as were liver enzymes and bilirubin.

A chest x-ray is obtained and displayed below: 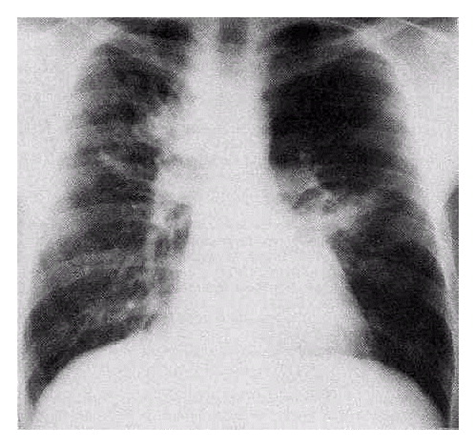 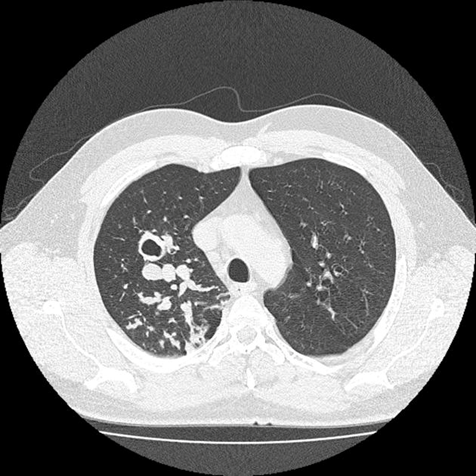 She was admitted to the Pulmonology service and started on iv methylprednisolone. Bronchoscopy was recommended to evaluate the cause of her persistent symptoms and the abnormalities seen on her imaging studies. Thick plastic-like wads of solid mucus were impacted in several segmental bronchi. Pathologic images of samples of this solid matter obtained at bronchoscopy are shown. 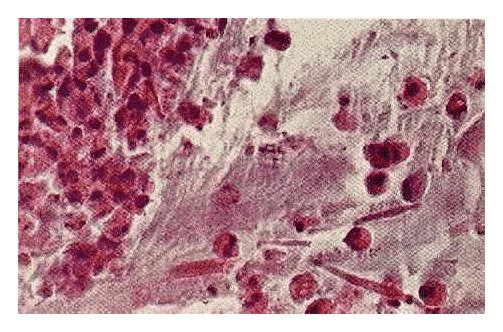 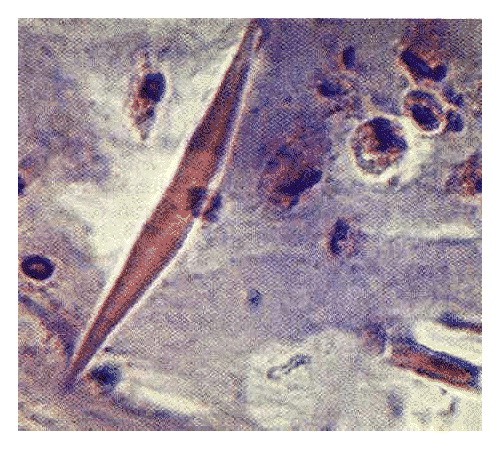 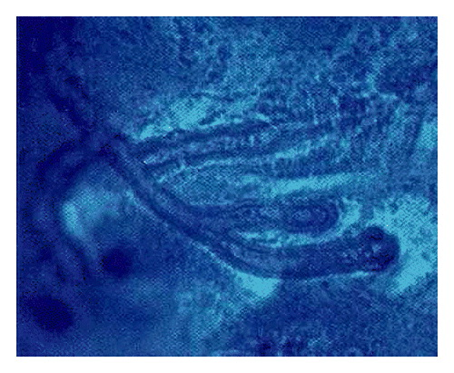 A serum IgE was > 10,000 IU/mL, and IgE--specific antibody was elevated. She was started on itraconazole. After 2 days of inpatient treatment, her cough and dyspnea were markedly improved and she was discharged home with a long tapering course of oral steroids as well as inhaled steroids, albuterol and itraconazole. She followed up with the pulmonologist and improved gradually over several months. After 4 months, PFTs were obtained showing a near-normal FEV1 and FEV1/FVC ratio.