Janeen Wright is a 73-year-old woman who presents to her primary care physician concerned with left leg numbness and weakness.

It’s hard for her to tell exactly when the problem started, but she thinks she first noticed it a few months ago and says she has now fallen a couple of times while walking because her left leg “just kind of gave out on me” while she was walking. Both legs “feel funny, kind of stiff and clumsy,” but the left leg is definitely worse than the right. She usually walks a few miles a day for exercise but has been afraid to walk these distances for the last several weeks.

She has a history of back pain due to degenerative disk disease for which she takes hydrocodone/acetaminophen as needed and says her back has been acting up more lately, requiring her to use a heating pad to sleep at night.

When asked about bladder or bowel changes, she says she has been more constipated than usual and has had to take some milk of magnesia. Her bowel movements have been soft, the usual size, and there is no blood in them/color change when they do occur. She has some baseline urinary dribbling “when she waits too long to pee” and doesn’t think this is different.

CMP and Phos: normal electrolytes with the exception of calcium of 7.9 and phosphorus of 7.1, renal function: BUN 31 Creatinine 2.3, normal transaminases, bilirubin, protein, and albumin. 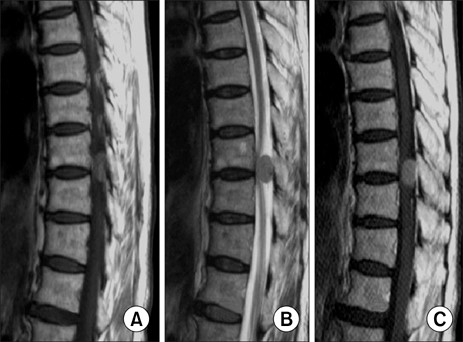 She is scheduled for surgery the following week based on her MRI results. At the time of surgery, the tumor, which looks like a flattened tan sphere with a smooth surface, appears to be arising from the dura and is separated easily from the surrounding tissues without invasion. The tumor is resected, and histopathology is shown below. 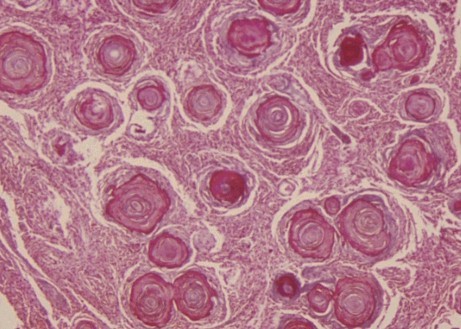 It demonstrates whorled formation of cells with prominent psammoma bodies. An NF gene mutation is present in the tumor tissue but testing of the patient for the same gene via cheek swab is negative.

After informing Ms. Wright of the confirmed diagnosis, she asks if this is the same tumor she had in her breast years ago. She would also like to know if her weakness and sensory loss are permanent. Lastly, she asks if she will need additional chemotherapy or radiation for her tumor.