Jana Tanner is a 23-year-old patient who is brought to the trauma center via ambulance after a multi vehicle motor vehicle accident.

The EMT gives the following report to the ER physician and nurses assuming care of Jana at 3:00 pm:

“This wreck was a mess.  A dump truck crossed the median and hit a semi, and about 10 cars piled up.  She was the driver of a little sedan.  She had a direct intrusion of a max duty pickup into the front driver’s side panel.  She was restrained, and the airbag deployed.  Fire Department had to extricate her with equipment, but a fire erupted before they could get to her inside the driver’s compartment so she has some burns on the right lower leg.  She is also complaining of abdominal pain.  She was placed in a c-collar and on a board at the scene, we started an IV and hung a bag of normal saline.  HR 120’s, blood pressure in the field was 100/60.  Normal mental status throughout.”

Initial exam and ATLS protocol done by ER physician, with findings reported verbally to team as exam is conducted.  Jana’s backboard is lifted to the stretcher and her remaining clothes cut off to evaluate additional injuries.  Jana is crying and shaking in pain and interacting with the team appropriately.  She is covered with shallow abrasions and several small bleeding lacerations, and is burned with blackening and peeling of the top layer of skin with whiteness of the underlying areas.  The burn covers the anterior surface of both legs from the ankle to the mid-thigh as well as some medial surface and posterior surface of the left leg.  She says the burns “kind of hurt” but that her abdominal pain is worse than the pain from her legs.  She has bruising visible over the left upper abdomen and is tender to palpation with guarding on palpation.  Her lung sounds are symmetric and clear bilaterally, and her distal pulses are palpable.  She is logrolled and her spinous processes are palpated with no pain from C7-sacrum.  A rectal exam is done with no blood and normal tone.  The backboard is removed but her C-collar is left on.

Initial labwork is ordered, including a type and screen.

An additional large-bore IV is placed with a second liter of crystalloid now infusing and the Trauma service is paged to the ER to help evaluate and treat the patient.

The trauma team assesses Jana’s airway, looking for singed hair of the nose and face, hoarseness or black mucous.  They determine that she is able to maintain her airway and agree with the lung findings.  She is bruised and tender on her left chest wall.

Two additional liters of crystalloid are given.

Labs were drawn at arrival and have returned:

The trauma attending orders 2 units of packed red blood cells to be given STAT and additional ringer’s lactate to be given as a bolus.

She explains to Jana that based on her examination and vital signs, she is very likely bleeding internally and needs emergency surgery.  This surgery will open up her belly and allow the surgeons to look for and stop the cause of the bleeding.  What is bleeding, or what is needed to stop the bleeding, isn’t known yet, and they may have to remove an organ or part of an organ to stop her bleeding.  There isn’t time to do more tests to look for the cause of bleeding before operating based on her vital signs and the ultrasound findings; waiting longer to be sure could mean that she would become unstable and is riskier than going ahead with a surgery to explore the cause of bleeding.  Jana consents to the surgery.

An indwelling urinary catheter is placed, with return of yellow urine.

Jana’s abdomen is full of blood when opened.  This is suctioned and the abdominal contents explored with the discovery that the spleen is ruptured. The splenic artery and vein are clamped, and the spleen removed.  No other intraabdominal injuries are found, and her abdomen is closed. Estimated blood loss is 2000 cc’s. She receives 2 additional units of PRBC’s in the OR and her blood pressure stabilizes.  Next, her burns are examined under anesthesia.  As feared, the majority of the burns are full-thickness. 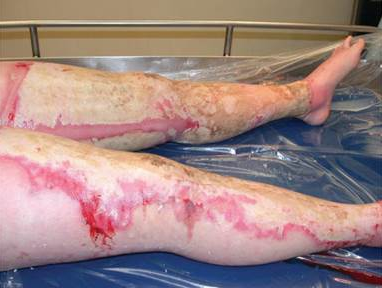 Wound care is initiated, along with plans for formal debridement within 24 hours. A nasogastric tube is placed and attached to low wall suction.

Vital signs at the close of her operative case (See below).  Anesthesia is discontinued and she is transported to the surgical ICU for monitoring.

Postoperatively, X-ray of the chest is done and shown below: 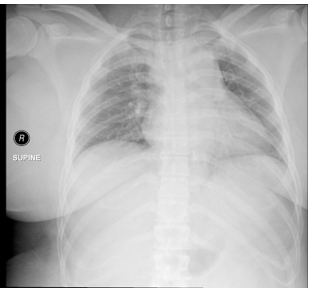 Jana awakens normally from the anesthesia and a Tdap booster is given as she cannot remember if she had her last tetanus shot within 5 years.  She is also continued on IV lactated ringers at a rate of 500 cc/h. The next morning, Jana’s labs show:

2 additional units of PRBC’s are ordered and her transfusion starts at 9:30 am. The transfusion is finished at 12:30 pm, and as the ICU nurse is removing the transfusion setup she notices that Jana’s oxygen saturations are now 91%. Jana also reports feeling more short of breath. Vitals show:

The on-call resident is called and examines Jana, noting that she now has crackles in both lung bases. A chest x-ray is ordered and is shown: 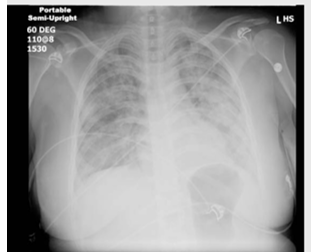 Jana is placed on a venturi mask at 60% FiO2 with improvement in her oxygen saturations but continued tachypnea in the 20’s and reported dyspnea.  An arterial blood gas shows a Pa O2 of 65 and a PaCO2 of 30 with a pH of 7.50.  Jana is treated with supportive oxygen therapy over the next couple of days and gradually improves until she no longer needs supplemental oxygen.

Over the next couple weeks in the hospital, Jana is kept on IV fluids, steroids and IV broad spectrum antibiotics.  She is taken back to the operating room repeatedly for debridement and skin grafting of her burns.  On hospital day 4, she is allowed to try sips of water and once she is able to keep those down, her diet is advanced to regular food.  She remains in the SICU for intensive burn care for three weeks.

As her medical team meets with her one morning to discuss the next steps in her rehabilitation Ms. Tanner asks, “I have heard there are patients here that have tested positive for coronavirus, and some of the staff as well.  Am I at increased risk for the coronavirus with my health conditions?  What types of precautions do I need to take while I am recovering and transitioning home?”