Three machines have been promoted at various times as the first electronic computers. These machines used electronic switches, in the form of vacuum tubes, instead of electromechanical relays. In principle the electronic switches would be more reliable, since they would have no moving parts that would wear out, but the technology was still new at that time and the tubes were comparable to relays in reliability. Electronic components had one major benefit, however: they could ``open'' and ``close'' about 1,000 times faster than mechanical switches.

The earliest attempt to build an electronic computer was by J. V. Atanasoff, a professor of physics and mathematics at Iowa State, in 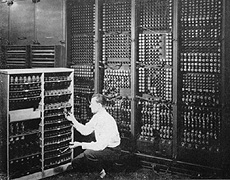 1937. Atanasoff set out to build a machine that would help his graduate students solve systems of partial differential equations. By 1941 he and graduate student Clifford Berry had succeeded in building a machine that could solve 29 simultaneous equations with 29 unknowns. However, the machine was not programmable, and was more of an electronic calculator.

A second early electronic machine was Colossus, designed by Alan Turing for the British military in 1943. This machine played an important role in breaking codes used by the German army in World War II. Turing's main contribution to the field of computer science was the idea of the Turing machine, a mathematical formalism widely used in the study of computable functions. The existence of Colossus was kept secret until long after the war ended, and the credit due to Turing and his colleagues for designing one of the first working electronic computers was slow in coming.

The first general purpose programmable electronic computer was the Electronic Numerical Integrator and Computer (ENIAC), built by J. Presper Eckert and John V. Mauchly at the University of Pennsylvania. Work began in 1943, funded by the Army Ordnance Department, which needed a way to compute ballistics during World War II. The machine wasn't completed until 1945, but then it was used extensively for calculations during the design of the hydrogen bomb. By the time it was decommissioned in 1955 it had been used for research on the design of wind tunnels, random number generators, and weather prediction. Eckert, Mauchly, and John von Neumann, a consultant to the ENIAC project, began work on a new machine before ENIAC was finished. The main contribution of EDVAC, their new project, was the notion of a stored program. Source:  First Generation Electronic Computers (1937-1953), ORNL