World War I: Papers Relating to the Foreign Relations of the United States

World War I: Photographs and Rotogravures

World War I: Surrender and the End of the War 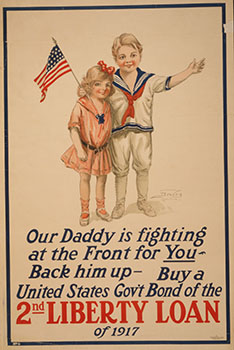 On April 6, 1917, the U.S. joined its allies--Britain, France, and Russia--to fight in World War I. Under the command of Major General John J. Pershing, more than 2 million U.S. soldiers fought on battlefields in France. Many Americans were not in favor of the U.S. entering the war and wanted to remain neutral. However, the U.S. eventually did enter the war. Disagreements in Europe over territory and boundaries, among other issues, came to a head with the assassination of the Archduke Ferdinand of Austria by a Serbian zealot on June 28, 1914. Exactly one month later, war broke out. In 1915, the British passenger liner the Lusitania was sunk by a German submarine, killing 128 Americans and futher heightening tensions. By the end of 1915, Austria-Hungary, Bulgaria, Germany, and the Ottoman Empire were battling the Allied Powers of Britain, France, Russia, Italy, Belgium, Serbia, Montenegro and Japan. In 1917, the U.S. entered the war. Germany formally surrendered on November 11, 1918, and all nations agreed to stop fighting while the terms of peace were negotiated. Source: Library of Congress  http://www.americaslibrary.gov/jb/jazz/jb_jazz_wwi_1.html

World War I: Transportation and Logistics