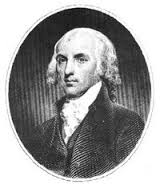 Born in 1751, Madison was brought up in Orange County, Virginia, and attended Princeton (then called the College of New Jersey). A student of history and government, well-read in law, he participated in the framing of the Virginia Constitution in 1776, served in the Continental Congress, and was a leader in the Virginia Assembly.

When delegates to the Constitutional Convention assembled at Philadelphia, the 36-year-old Madison took frequent and emphatic part in the debates.

Madison made a major contribution to the ratification of the Constitution by writing, with Alexander Hamilton and John Jay, the Federalist essays. In later years, when he was referred to as the "Father of the Constitution," Madison protested that the document was not "the off-spring of a single brain," but "the work of many heads and many hands."

In Congress, he helped frame the Bill of Rights and enact the first revenue legislation. Source: The White House