In the councils of government, we must guard against the acquisition of unwarranted influence, whether sought or unsought, by the military industrial complex.Dwight Eisenhower

An executive order -- also called the executive power in Article II of the U.S. Constitution -- is a rule or order issued by a president that has the force of law.

Acting on a campaign pledge, President-elect Dwight D. Eisenhower went to Korea on December 2, 1952. After visiting the troops, their commanders and South Korean leaders, and receiving briefings on the military situation in Korea, Eisenhower concluded, "we could not stand forever on a static front and continue to accept casualties without any visible results. Small attacks on small hills would not end this war." President Eisenhower sought an end to hostilities in Korea through a combination of diplomacy and military muscle-flexing. On July 27, 1953, seven months after President Eisenhower's inauguration as the 34th President of the United States, an armistice was signed, ending organized combat operations and leaving the Korean Peninsula divided much as it had been since the close of World War II at the 38th parallel. Source: Eisenhower Presidential Library, Museum & Boyhood Home 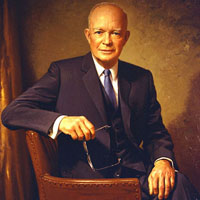 Dwight David Eisenhower was an inspiring military leader, best-selling author, head of Columbia University, and president of the United States. As the top American general and later Allied Supreme Commander in the European theater, he directed Allied forces in World War II to victories in North Africa and Italy and coordinated the massive and successful D-Day invasion of France. Extraordinarily popular with both his soldiers and the American public, Eisenhower was twice elected to the presidency, where he led the United States with determination and purpose during the difficult early years of the Cold War. After his retirement from public life in 1961, Eisenhower continued to serve his country as an advisor to presidents Kennedy and Johnson. Library of Congress.