Alexander Hamilton,  a Delegate from New York; born on the island of Nevis, British West Indies, January 11, 1757; immigrated to the United States in 1772, where he received educational training in the schools of Elizabethtown, N.J., and King’s College (now Columbia University), New York City; entered the Continental Army in New York in 1776 as captain of Artillery; appointed aide-de-camp to 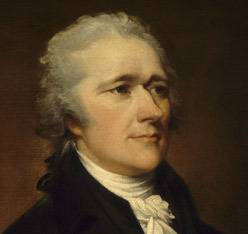 General Washington March 1, 1777, and served in that capacity until February 16, 1781; Member of the Continental Congress in 1782, 1783, and 1788; member of the Annapolis Convention of 1786; served in the New York State assembly in 1787; member of the Philadelphia Constitutional Convention in 1787 which adopted the Constitution of the United States; member of the State ratification convention in 1788; studied law; was admitted to the bar and practiced in New York City; Secretary of the Treasury in the Cabinet of President Washington 1789-1795; returned to New York and resumed the practice of law; mortally wounded in a duel with Aaron Burr at Weehawken on the Hudson, and died in New York City the following day, July 12, 1804; interment in Trinity Churchyard. U.S. Congress. From: Chernow, Ron. Alexander Hamilton. New York: Penguin Press, 2004; Hamilton, Alexander. Writings. New York: Library of America, 2001.