Conflict between the United States and Great Britain boiled over, left unresolved following independence. Angered by British interference in its commerce and the capture of American sailors, the United States declared war and invaded British Canada. The war lasted three years, with combatants on both sides representing the great diversity of the North American continent: Europeans, Americans, Native Americans, and Americans of African descent -- both enslaved and free.

The War of 1812 is among the least known wars in American history. It was a small war, fought for obscure reasons along the fledgling republic's frontiers, but its consequences were far-reaching. The conflict helped to shape American identity, yet served not as an end, but as a harbinger for much greater change to come. The War of 1812, A New Nation in Peril, National Park Service. 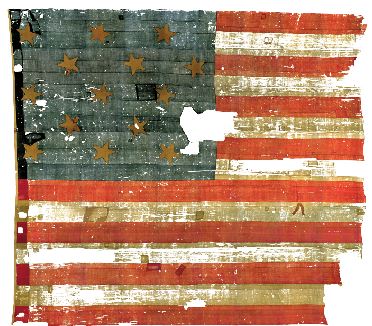 On September 14, 1814, U.S. soldiers at Baltimore’s Fort McHenry raised a huge American flag to celebrate a crucial victory over British forces during the War of 1812. The sight of those “broad stripes and bright stars” inspired Francis Scott Key to write a song that eventually became the United States national anthem. Key’s words gave new significnce to a national symbol and started a tradition through which generations of Americans have invested the flag with their own meanings and memories. Smithsonian, National Museum of American History
http://amhistory.si.edu/starspangledbanner/