Autism spectrum disorder (ASD) is a range of complex neurodevelopment disorders, characterized by social impairments, communication difficulties, and restricted, repetitive, and stereotyped patterns of behavior.  Autistic disorder, sometimes called autism or classical ASD, is the most severe form of ASD, while other conditions along the spectrum include a milder form known as Asperger syndrome, and childhood disintegrative disorder and pervasive developmental disorder not otherwise specified (usually referred to as PDD-NOS).  Although ASD varies significantly in character and severity, it occurs in all ethnic and socioeconomic groups and affects every age group.  Experts estimate that 1 out of 88 children age 8 will have an ASD (Centers for Disease Control and Prevention: Morbidity and Mortality Weekly Report, March 30, 2012).  Males are four times more likely to have an ASD than females.  (National Institute of Neurological Disorders and Stroke)

Autism: Who is at Risk? 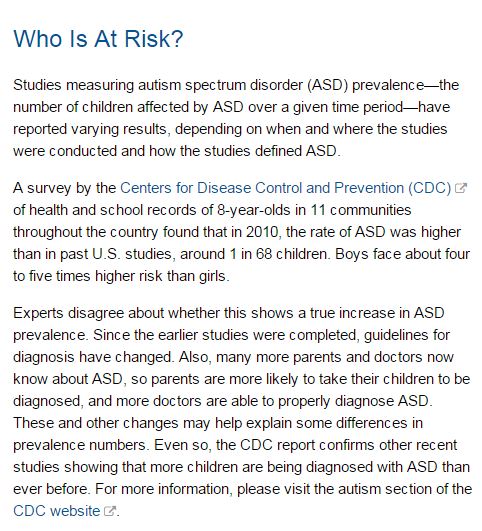 Concerns about Autism and Vaccines

Recent estimates from CDC's Autism Developmental Disabilities Monitoring network found that about 1 in 68 children born in 2002 have ASD. This estimate is higher than estimates from the early 1990s. Over the years, some people have had concerns that autism might be linked to the vaccines children receive. One vaccine ingredient that has been studied specifically is thimerosal, previously used as a preservative in many recommended childhood vaccines. However, in 2001 thimerosal was removed or reduced to trace amounts in all childhood vaccines except for one type of influenza vaccine, and thimerosal-free alternatives are available for influenza vaccine. Evidence from several studies examining trends in vaccine use and changes in autism frequency does not support such an association between thimerosal and autism. Furthermore, a scientific review by the Institute of Medicine (IOM) concluded that "the evidence favors rejection of a causal relationship between thimerosal–containing vaccines and autism." CDC supports the IOM conclusion that there is no relationship between vaccines containing thimerosal and autism rates in children. (CDC)