The history of the Great Plains Indians can be traced back at least 13,000 years and possibly even millenia. During the last stages of the Ice Age, small bands of people migrated in search of megafauna, or game, such as mastodons and mammoths. As game became extinct, their cultural organization became more complex, shifting to bison hunting and living in earth-lodge dwellings. However, European contact brought much change. Prior to this contact, tribes of the plains lived by agriculture or gathering. The introduction of horses by the Spanish in the late 16th century provided Indians with a more efficient method of hunting buffalo. Many groups--the Kiowa, Cheyenne, Sioux, Comanche and others--shifted to a nomadic culture. Portable tipis, immense value placed on horses, and the accumulation of herds were common patterns among these groups. Others such as the Mandans, Arikara, Hidatsas, Pawnee, Wichita and Omaha remained horticultural societies, establishing permanent settlements in the river valleys of the plains. Source: Lewis and Clark Expedition, National Park Service 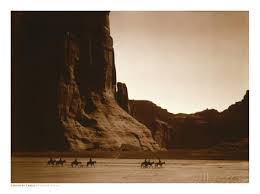 The North American Indian by Edward S. Curtis is one of the most significant and controversial representations of traditional American Indian culture ever produced. Issued in a limited edition from 1907-1930, the publication continues to exert a major influence on the image of Indians in popular culture. Curtis said he wanted to document "the old time Indian, his dress, his ceremonies, his life and manners." In over 2000 photogravure plates and narrative, Curtis portrayed the traditional customs and lifeways of eighty Indian tribes. The twenty volumes, each with an accompanying portfolio, are organized by tribes and culture areas encompassing the Great Plains, Great Basin, Plateau Region, Southwest, California, Pacific Northwest, and Alaska.